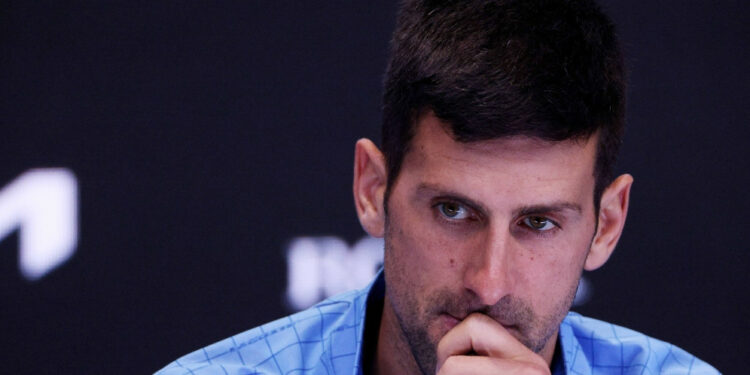 After qualifying for the quarter-finals on Monday at the expense of Alex De Minaur, Novak Djokovic banged his fist on the table in front of the press about all those people who keep questioning his injuries. The Serb is all the more annoyed that he has the feeling of being the only player to be the victim of this treatment.

A ticket for a 54th Grand Slam quarter-final, a tenth title which is almost inevitably looming for him in Melbourne and a left thigh injury which may have all bad memories. Novak Djokovic has everything to be a happy man. In any case a priori, because in reality, the Serb who has not lost for 38 games on Australian soil does not take off.

The reason ? The former world number 1 is furious to hear his injuries systematically questioned. It had been the case two years ago when he lifted the Australian Open trophy despite an abdominal problem that tarnished his start to the tournament, it has been the case again this year since. that the hamstrings of the left thigh of the “Djoker” began to whistle.

For many, the former world number 1 has nothing at all. And that drives the interested party crazy, who made no secret of it on Monday after crushing Alex De Minaur in the round of 16. Djokovic is all the more annoyed that he has the impression of being the only one to be systematically questioned when he makes it known that he is physically diminished.

Djokovic: “I thank those who doubt me”

“Only my injuries are called into question: when the other players are injured, they are victims, whereas when it’s me, supposedly I’m pretending”, got carried away the Serb, who assures however that he will not fall into the trap and will never justify himself. It would be wrong to know him.

“I don’t feel the need to prove anything to anyone. And I’m not really interested in what people think. But it’s fun to see how the narrative around me is always different from other players. And no offense to his detractors, the more “Nole” is criticized, the more it gives him wings: “I’m used to it, it just gives me extra strength and motivation. For that, I thank those who doubt me. »