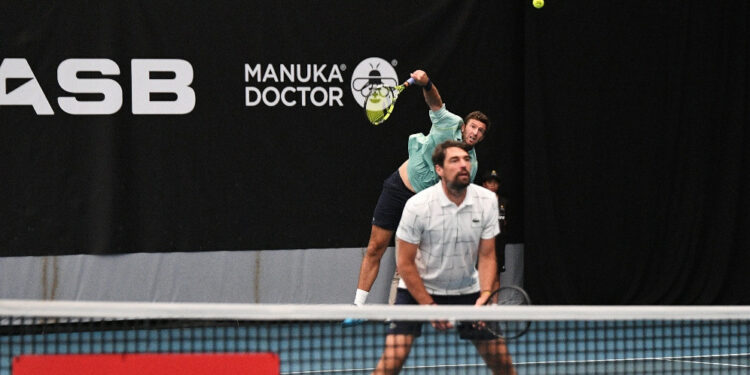 Jérémy Chardy, for his comeback on the courts, and Fabrice Martin qualified for the semi-finals of the doubles tournament on Tuesday. The French pair will not, however, find the other two Tricolors Benjamin Bonzi and Arthur Rinderknech, eliminated in the quarterfinals by Hugo Nys and the Polish Jan Zielinski.

What a comeback for Jérémy Chardy! Back on the courts, at the start of 2023 in Melbourne, after 18 years of absence due to complications after being vaccinated against Covid-19 and then to an injury to his right knee, which had forced him to to operate, the Palois could hardly imagine what he is going through. If in singles, after a victory in four sets against the Colombian Galan for his first match in competition since August 2021, he had not weighed heavily against the Briton Dan Evans, who had corrected him in the 2nd round, in doubles, in On the other hand, Chardy is writing the most beautiful chapter of his career. Alongside Fabrice Martin, his faithful partner for five years in the specialty, the former world number 25 has indeed offered the right to play in the semi-finals of the Australian Open. Chardy and Martin opened the doors of the last four on Tuesday by winning the super tie-break (6-3, 2-6, 7-6 and 10-4 in this super tie-break) against Salvadoran Arevalo and Dutch Rojer, seeded number 3 in the tournament and who were among the big favorites for the final victory.

For Bonzi and Rinderknech, it’s over

💪 Chardy and Martin get their ticket to the semi-finals, in men’s doubles. Facing the Dutch and Salvadoran duo, seeded n° 3.

A rather incredible performance for our two representatives. Admittedly, the two men have already won three tournaments together (Doha, Marseille and Estoril) and had also reached the final of Roland-Garros, in 2019. However, in Melbourne, they had never managed to go further than the 8th of final. And their last presence at this stage of the tournament dates back to 2018. Since then, they had made the 2nd round at best. One more victory and they will play their second Grand Slam final. On the other hand, it will not be Franco-French. The other tricolor pair still in the running in the quarter-finals, Benjamin Bonzi and Arthur Rinderknech, indeed took the door on Tuesday after being beaten dryly (6-1, 6-4) by the tandem made up of Monegasque Hugo Nys and Polish Jan Zielinski. Too bad for Bonzi and Rinderknech, who had managed to bring down Colombians Robert Farah and Juan Sebastian Cabal (n°12) in the previous round, who are among the best doubles players in the world. All our hopes now rest on Chardy and Martin.