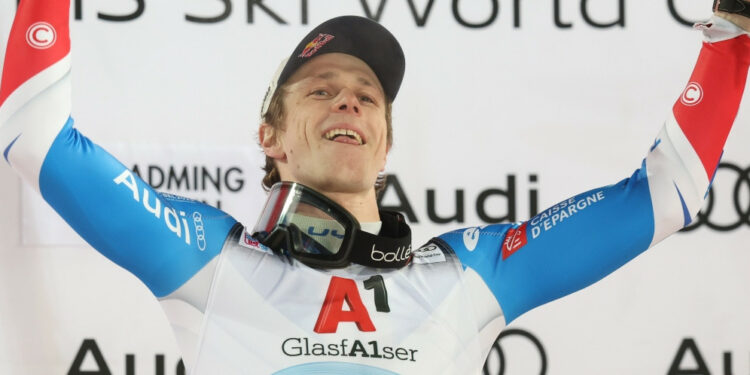 Seventh in the first run of the Schladming slalom, Clément Noël signed a magnificent second run and took advantage of the mistakes of his rivals to clinch his tenth victory in the World Cup! A victory that feels good after an average first half of the season.

Finally a victory for the French clan in this 2022-23 World Cup season! And it was Clément Noël who won it! The Olympic champion won the Schladming night slalom on Tuesday in Austria, after a very good comeback in the second run. Only seventh in the first heat, 77 hundredths behind Henrik Kristoffersen, the 25-year-old Vosgien only posted the eighth fastest time in the second, but all his rivals did even worse! While the Norwegian Atle Lie McGrath had been sitting in the leader’s seat for six bibs, Clément Noël started nine tenths ahead of him, and he wasted no time, so that he ” lit green” when crossing the finish line. All that remained was to wait for the last six skiers to pass… and they all made mistakes or skied slower than the Frenchman! Assured of the podium after the passage of Loïc Meillard (5th in the end), Noël then trembled while watching Manuel Feller and Henrik Kristoffersen pass, but the Austrian was much slower at the bottom of the course and finished fourth, while the Norwegian started too fast and made a big mistake in the first part of the race, so that his lead of 77 hundredths at the start turned into a delay of 54 hundredths halfway through, and 1″33 at the end .

Clément Noël therefore wins the tenth victory of his career in the World Cup, the first since December 2021, and gives another relief to his season, he who had abandoned three times, and finished third in Garmisch-Partenkirchen, sixth in Wengen and eighth Sunday in Kitzbühel. This comes at the best time, two weeks before the start of the Courchevel-Méribel Worlds! Following this race, Lucas Braathen (3rd) remains in the lead of the slalom World Cup (Noël is 7th), while in the general classification, Henrik Kristoffersen, third, takes 24 points from Marco Odermatt and Aleksander Aamodt Kilde (Pinturault is 8th). On Wednesday, a giant will be on the program in this same Schladming station.