An Argentinian world champion at the heart of a new scandal 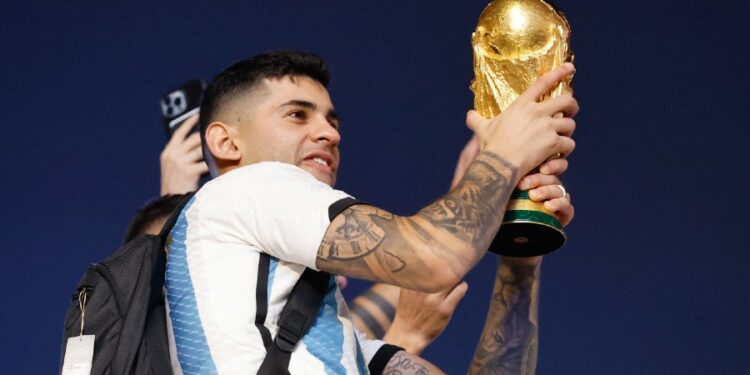 As part of the Juventus investigation, Italian justice is also interested in the transfer of Cristian Romero, the Argentine world champion from Tottenham.

He is Argentinian, he plays in England, and his name has just appeared in the investigation into Juventus, which earned avery heavy sanction of 15 penalty points to the Turin club. Italian justice is indeed interested in the transfer of Cristian Romero to Tottenham, in August 2021.

The relationship between Romero, Tottenham and Juventus? There are several of them. First the fact that the Argentinian central defender belonged to Juventus for two years, between 2019 and 2021, without ever playing a single match with the Bianconeri. The first season, he was loaned to Genoa, the club where Juve recruited him in 2019 for just over 30 million euros. The second season he played at Atalanta.

The second common point is Fabio Paratici. The Italian sporting director managed the Juventus transfer window for a long time, in the 2010s. He left Turin in 2021, to join Tottenham a few weeks later. And it was that year that Romero made the same trip, with a transit through Bergamo.

What alerted the Italian justice is this audio conversation between Paratici and Luca Percassi, the general manager of Atalanta: “You paid 16 million euros for a player that you sell after a day for 50 million euros”, can we hear.

Indeed, after his one-year loan to Bergamo (2020-2021), Romero was transferred to Atalanta for 16 million euros. The next day, the player was loaned to Tottenham, the new club of Paratici, with a purchase option of 50 million euros, exercised a year later. A very strange move…

We can also mention Cristian Romero. Bought from Genoa for €31m, then loaned immediately to … Genoa … Then loaned to Atalanta for €2m, the same player from Muratore’s transfer (see above) for €7m between the two clubs.