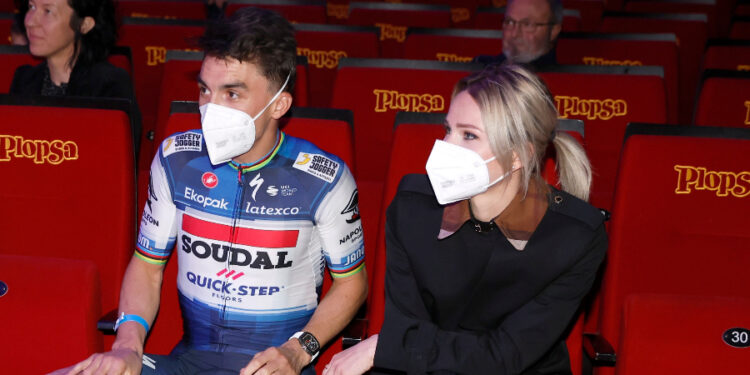 Very critical of Julian Alaphilippe for several weeks, Patrick Lefevere gave a layer to the Belgian media, even involving his companion.

After a year 2022 marred by injuries, Julian Alaphilippe is inevitably thirsty for revenge. The Quic Step runner had nevertheless imagined a more serene off-season. Because if he seems free from the pain he had to deal with throughout last season, the last few weeks have been hectic. Consequence of the strong criticisms issued by Patrick Lefevere against him.

“I want him to recover. He owes me revenge, thus launched last month the one who leads the formation that has become Soudal – Quick Step in 2023. Julian has a champion’s salary but he must confirm that he still is. That he is no longer world champion, I don’t care, but in recent years he hasn’t won much. »

Asked about these criticisms, Julian Alaphilippe had assured that Patrick Lefevere had held a completely different speech in front of him. “He never said such things to my face,” he said in the columns of L’Equipe. To be honest, I was a little surprised to read that. If he had any problem with me, I think he would have told me first. So good… I don’t care at all. »

His wife and his manager were there

But according to the boss of the Quick Step, the tricolor double world champion knows what to expect. And Marion Rousse, companion of the native of Saint-Amand-Montrond also. “He says we didn’t have that conversation, I say we did. His wife and his manager were there, thus launched Patrick Lefevere to the journalist Karl Vannieuwkerke. I told him that I was not happy at all. I understand his illnesses and his falls, but you can’t keep hiding behind this. It was the cold truth. »

“Everyone knows I don’t go after injured runners, but if there’s a high price tag attached to it, then I can react, he continued. Last year he won twice, previous years three and four times. I didn’t take him on the team for that. »