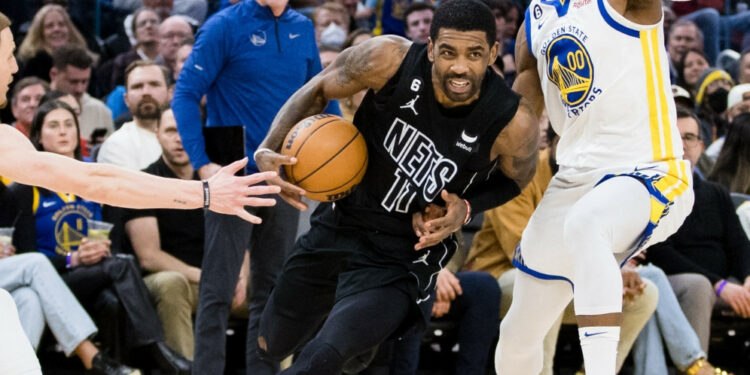 The NBA night was notably marked by the new exploits of LeBron James and Kyrie Irving. The first, author of 37 points, allowed the Lakers to achieve a 25-point comeback against Portland. The second, for his part, scored 38 points (including 12 in the last quarter) for Brooklyn, winner at Golden State after being 13 points behind with 7 minutes remaining.

LeBron James and Kyrie Irving like the good old days. The two ex-teammates in Cleveland, where they won together in 2016 a title from elsewhere at the expense of Golden State while the Warriors had led 3-1 after the first four games of these Finals, hit hard each of their Sunday night side. Two days after having already been very scared against Memphis, the Lakers managed an even stronger comeback on Sunday on the Portland floor, winning (121-112) against the Blazers after being 25 points behind at the break (71-46). A feat that Californians owe in particular to two men, or rather three, insofar as Dennis Schröder (24 points, 8 assists, 6 rebounds) also sounded the revolt in the second half of this heavily battered LA franchise during the first act. But less however than Thomas Bryant (31 points, 14 rebounds) and James, still author of a festival, with 37 points, 11 rebounds and 4 assists for the “King”, elected MVP of the season in 2016 with the Cavs during this year which had ended in apotheosis for Cleveland.

Irving had turned into a hero by scoring the coronation basket in Game 7. Seven years later, “Uncle Drew” still hurt a lot on Sunday at the Warriors, beaten 120-116 on the wire at Chase Center. Despite many failures of the “Splash Brothers” – Curry, author of 24 points, returned only 7 of 16 shots, when Klay Thompson, 10 points, missed everything at three points: 0 of 7 – San Francisco players However, they were leading by 13 points with only 7 minutes left to play. The star point guard of the Nets then pulled out all the stops. And of his 38 points in the game (12 of 22 on shots), and adding 7 rebounds and 9 assists, Irving signed 12 in the last quarter. (34-26, 27-10 to finish) to allow his team to reverse a situation that seemed very compromised. His last assist of the game, 27 seconds from the buzzer, allowed Royce O’Neal to shower the Warriors definitively, like Irving in 2016.