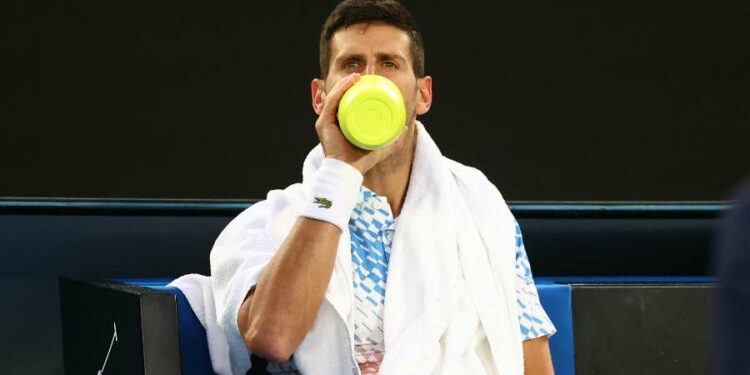 Novak Djokovic is off for a new controversy because of a drink. This time, it is not the content of the bottle received from his staff that is in question but the message probably written on the can.


A wound ? What injury? While he has had to deal with pain in his left thigh since the start of the tournament, Novak Djokovic proved irresistible on Monday during his round of 16 against local Alex de Minaur. While he had dropped a set against the French Enzo Couacaud in the second round and then had to work against Grigor Dimitrov in the round of 16, the Serb this time delivered a real recital to win 6-2, 6-1, 6-2.

The former world number one, in search of a tenth title at the Australian Open, is nonetheless at the heart of a new controversy. The fault of a bottle received at the end of the second round lost in the tie-break against Enzo Couacaud. To believe the Daily Mail, his clan would have indeed sent him a can on which a message was written, which is similar to coaching, always formally prohibited during the meetings.

And the sequence is all the more talked about as the Serb, who had experienced a soft spot in the second set after flying over the first set, ended the meeting in a cannonball to win the last two sets 6-2, 6-0.

Above all, this controversy comes when during the last Masters 1000 at Bercy, his staff had been filmed preparing a drink in the stands, making sure to hide their actions as much as possible when they realized that they were in the eye of a camera.

Benzema offers a delicious evening to his girlfriend

Benzema offers a delicious evening to his girlfriend