Djokovic: “I didn’t feel anything…” 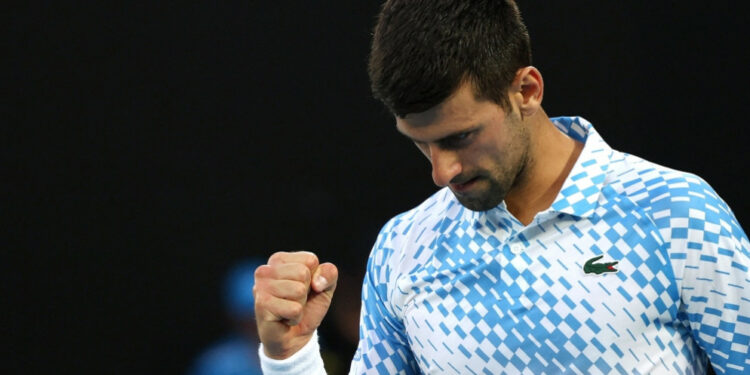 After giving Alex De Minaur a lesson on Monday in the round of 16, Novak Djokovic was reassuring about his left thigh injury. The Serbian, who played the match with an imposing bandage, confessed that he didn’t feel any pain this time.

Launched towards a tenth coronation at the Australian Open, Novak Djokovic is untouchable when he practices his best tennis and plays matches in full possession of his means. This had not been the case since the start of the fortnight, the Serb suffering from pain in the left thigh which could even make us fear the worst and fear that the nine-time winner would be brought, like Rafael Nadal before him, to have to kneel down. This was not the case, even if the world number 5 gave real alarming signs, in particular last Saturday against the Frenchman Enzo Couacaud. On Monday, however, against Alex De Minaur in the round of 16, Djokovic gave the impression of not suffering a single second from this hamstring discomfort. He had yet appeared on the court with an imposing bandage around his left thigh which suggested that he was not yet recovered. It remained to be seen how he would behave on the court. If De Minaur, pulverized by the former world number 1 in just over two hours (6-2, 6-1, 6-2), wanted an answer, he was served. The public had to wait until the end of the match to find out more about the state of health of the one who is once again the big favorite for the final victory, especially in the absence of Carlos Alcaraz and after the exit of Nadal’s track, hit in a hip.

Djokovic: “I can’t say it’s over, but I hope it will continue like this”

Unsurprisingly, given his behavior during this part which turned into a demonstration, the “Djoker” confided to the speaker’s microphone that he was much better. The proof: he even admitted that he had not felt the pain in front of the Australian. “I didn’t feel anything today, it didn’t show that I was injured,” revealed the Serb, who nevertheless crossed his fingers to be definitively rid. But without any certainty of it. “I can’t say it’s over, but today I moved well, I didn’t have any pain, and I hope it will continue like this. “In the meantime, Djokovic will continue his treatment, as he had done before approaching this 8th final, he who is however not a regular of the genre. “I’ve been taking a lot of anti-inflammatory pills the past few days to mask the pain. Usually I don’t like that. I don’t want to go into further explanation, but today was fine. “We must wish for the one who could find the place of world number 1 if he goes to the end for the tenth time as for his fans, very numerous in Australia, that it will continue to go.