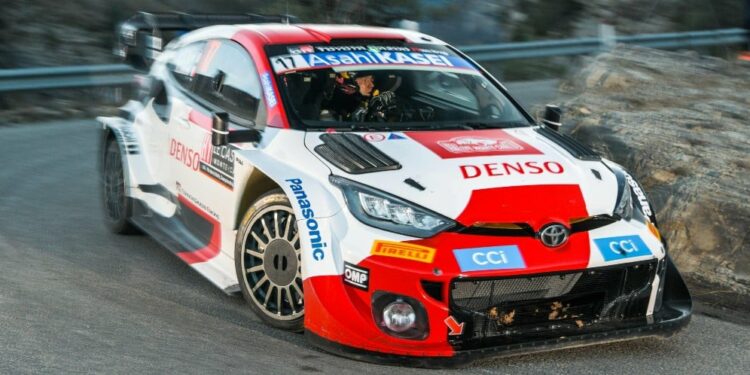 While he was more than 30 seconds ahead of Kalle Rovanperä after the first two stages of the day, Sébastien Ogier lost ground on the reigning world champion and will approach the final day with a margin of sixteen seconds.

Sébastien Ogier is ever closer to a ninth Rallye Monte-Carlo. Winner of six specials during the first two days of competition, the Gapençais lived a Saturday in two stages on the roads of the hinterland of Nice. While Kalle Rovanperä attacked hard from the start with the best time during SS9, Sébastien Ogier responded to him during the following timed sector. The result was a margin of just under 35 seconds for the Habs over their successor in the World Rally Championship record. On roads prone to punctures, the eight-time world champion decided to manage his efforts and limit risk-taking. Not adding the slightest scratch time to his record, the Toyota driver left these honors to Kalle Rovanperä on SS11 and Thierry Neuville on the occasion of SS12 and then SS13. Before the last timed sector of the day, Sébastien Ogier managed to maintain a cushion of just over 25 seconds.

Ogier did not take any risks

However, over the 21.78 kilometers of the sector linking Ubraye to Entrevaux, covered for the second time of the day but in nocturnal conditions, the lack of risk taking by the Gapençais was very marked. Indeed, if Kalle Rovanperä set the scratch time, Sébastien Ogier dropped almost ten seconds to the Finn. “I think that should be enough, confided the Toyota driver at the end of the special about his lead in the general classification. Regarding the punctures, it was the most dangerous stage so I didn’t push and I’m happy to have finished this timed sector. With four special stages and a little less than 68 kilometers to go in this Monte-Carlo Rally, Sébastien Ogier only has a sixteen-second lead while Thierry Neuville consolidated his third place at 32 seconds, the Belgian pushing Elfyn Evans to almost 25 seconds. After losing his power steering on Friday, just like his teammate Ott Tänak on Saturday, Pierre-Louis Loubet had to retire on the first special of the day after going off the road. After seeing victory slip away from him at the very end of the race last year against Sébastien Loeb, Sébastien Ogier does not seem ready to let success end up in other hands.