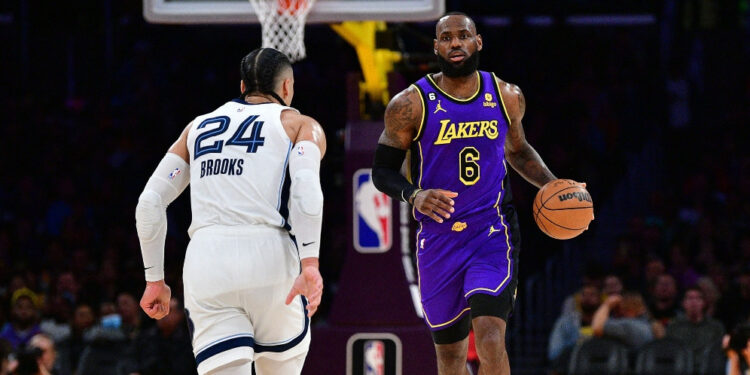 While they remained on eleven straight wins, the Memphis Grizzlies lost to the Los Angeles Lakers. Denver, winner of Indiana, therefore takes a little lead.

They had the opportunity to break their franchise record for most straight wins. But the Memphis Grizzlies have fallen and so the series ends at eleven. It was on the Lakers floor that Ja Morant and his men suffered their first defeat since December 28, with a score of 122-121. A small hold-up from the Californians, who were led during a large part of the meeting (75-88 at the end of the third quarter in particular). Thirteen seconds from the end, it was still the Grizzlies who were leading 119-120, but Denis Schroder managed an interception in the hands of Desmond Bane in the center of the field and scored a lay-up (121-120), then a free throw (122-120). Ja Morant (22pts, 8pds) then missed his shot, then Brandon Clarke only made one of his shots, and it was therefore the Lakers who won this prestigious victory. Russell Westbrook finished top scorer with 29 points, while LeBron James added 23. This did not prevent the Californians from remaining antepenultimate in the Western Conference.

Thanks to this defeat of Memphis, Denver took the opportunity to take some air at the top of the standings, following its ninth success in a row, against Indiana (134-111). Even deprived of Nikola Jokic (adductors), the Nuggets led almost from start to finish and widened the gap throughout the match to bring it to +30 in the final minutes. Jamal Murray (soon to be 26) scored his first career triple-double: 17 points, 10 rebounds, 14 assists. All is well also for Sacramento, third and winner of their sixth game in a row, to the detriment of Oklahoma City: 118-113. Led until the middle of the third quarter, the Kings reversed everything in the last quarter of an hour, in the wake of a Keegan Murray author of his best game of the season: 29 points, 14 rebounds. Also note the triple-double of Domantas Sabonis (18pts, 14rbds, 14pds) and the 37 points and 7 assists of Shai Gilgeous-Alexander. Also in the West, Kawhi Leonard broke his season record (36pts) in the Clippers’ 131-126 victory at San Antonio.

In the East, the top three (Boston-Philadelphia-Milwaukee) did not play, and the fourth took the opportunity to reduce the gap a little. Brooklyn has indeed put an end to a series of four defeats by winning 106-117 at the Jazz. The Nets waited until the end of the match to make the difference, thanks in particular to a Kyrie Irving author of 48 points, including 21 in the last quarter (also 11 rebounds, 6 assists and 4 steals). Jordan Clarkson’s 29 points weren’t enough for Utah. Cleveland (5th) and New York (6th) however lost, respectively against Golden State (114-120 despite 31pts from Darius Garland) yet deprived of Curry, Thomspon, Wiggins and Green, and Atlanta (139-124 despite the 32pts, 9rbds and 6pds of Julius Randle).

Atlanta Hawks – New York Knicks : 139-124
Evan Fournier (NYK) did not play, by decision of the coach

A Sabalenka-Bencic shock in the eighth