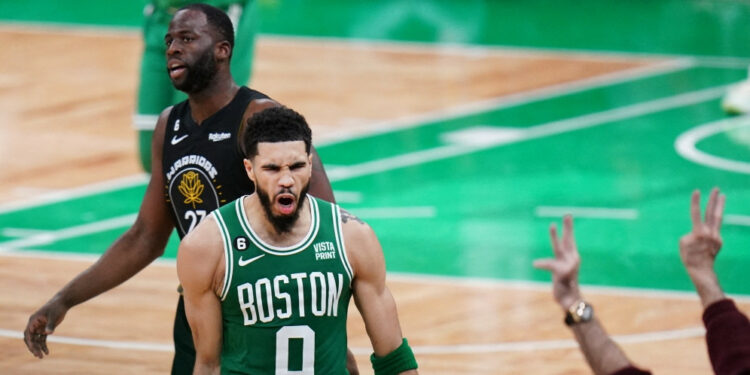 In addition to the match in Paris, four other NBA meetings were on the program Thursday, and they notably saw Boston beat Golden State after extra time, and Phoenix, however moribund lately, dominate Brooklyn.

The best team in the League received the defending champion this Thursday, and the poster, incidentally a remake of the last Finals, kept all its promises! It was finally after overtime that Boston managed to beat Golden State 121-118 to sign its eighth straight victory. If the Celtics generally dominated the first half, the Warriors took the lead in the third quarter, as often, and led by a maximum of eleven points. At the start of the last quarter, they were still leading 83-89, then 106-103 with 28 seconds left from the buzzer. But three-point Jaylen Brown snatched overtime, Stephen Curry missing the game-winning shot in stride. An overtime where Boston led 110-106, before conceding a 5-0 (110-111), then inflicting an 8-0 on the Californians (118-11). Thanks to Jayson Tatum, the gap increased to +8 (121-113), and Jordan Poole missed the shot that would have taken both teams into second overtime. Tatum finishes with a huge double-double: 34 points, 19 rebounds, 6 assists and 3 steals and further solidifies his status as an MVP candidate. Stephen Curry meanwhile finished with 29 points and 7 assists.

The Minnesota Timberwolves – Toronto Raptors : 128-126
Rudy Gobert (MIN), injured in the groin did not play