The Netflix curse has struck again! 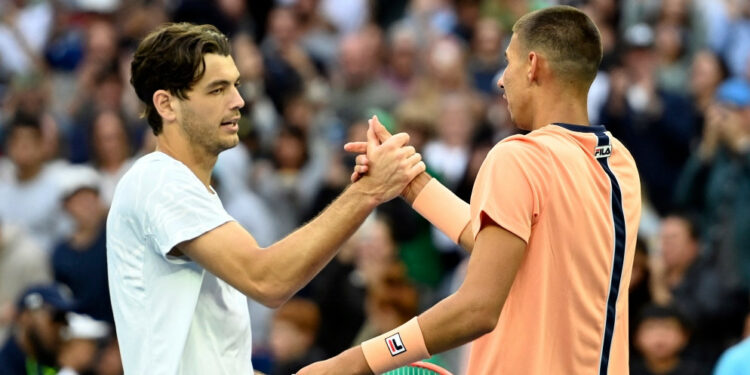 Taylor Fritz and Alexander Zverev were both knocked out in the second round of the Australian Open, by Alexei Popyrin and Michael Mmoh respectively.

The Netflix curse has struck again! Many players featured in the tennis documentary released last week had to forfeit or were eliminated from entering Melbourne (Kyrgios, Berrettini, Tomljanovic, Badosa…), and a new name came up. add to the list this Thursday: Taylor Fritz. While eight Americans have already won their ticket for the third round, the best of them is already stopping, after his defeat in five sets and 4:01 of play against Alexei Popyrin. Facing the 113th player in the world, the n°9 lost 6-7, 7-6, 6-4, 6-7, 6-2. This match was very close in the first four sets and rich in aces: 21 for the American, 19 for the Australian. Fritz won an unbreaked first set 7-4 in the tiebreak, then Popyrin returned the favor in the second by winning the tiebreak 7-2. No player had yet lost his service at that time. It was finally at 1-1 in the third set that the Australian signed the first break of the match, at 1-1, and then he left no chance for the American, as he won his four service games on blank games! The fourth set was rich in twists, since Fritz first created a set point at 5-3 but missed it, then Poyprin had a match point at 6-5 in the tie-break but the missed, and it was ultimately the Californian who had the last laugh by winning the tiebreak 8-6. It was therefore necessary to play a fifth set, but this time, no suspense. Fritz completely cracked, losing his serve at 2-1 and 5-2, and leaving the victory to Popyrin, one of the best of his career! After Nadal and Ruud, it is therefore a third player in the Top 10 who disappears.

The crazy week of Mmoh, who offers Zverev!

Another cador on the mat this Thursday, even if it is a less big surprise: Alexander Zverev (13th). The German player, who is making his comeback after his serious ankle injury suffered at the last Roland-Garros, was eliminated by Michael Mmoh (107th). Lucky-loser then winner of Laurent Lokoli by saving a match point, the 25-year-old is living a dream week, and he won 6-7, 6-4, 6-3, 6-2 in 3:27. Author of 13 aces for 7 double faults during this meeting, the native of Saudi Arabia lost the first set 7-1 in the tie-break after having nevertheless led 5-3 during the round. But he then won the next three, helped by the German’s 9 double faults, thanks to a break at 2-2 in the second, at 3-3 and 5-3 in the second and at 3-2 and 5-2 in the third. So here he is in the third round of a Grand Slam tournament for the first time in his career. As for Zverev, we should see him again on the Rotterdam side in mid-February. Also note this Thursday the easy victory of Grigor Dimitrov (28th) over Laslo Djere (68th): 6-2, 6-2, 6-0 in 1h33 without having the slightest break point to defend.