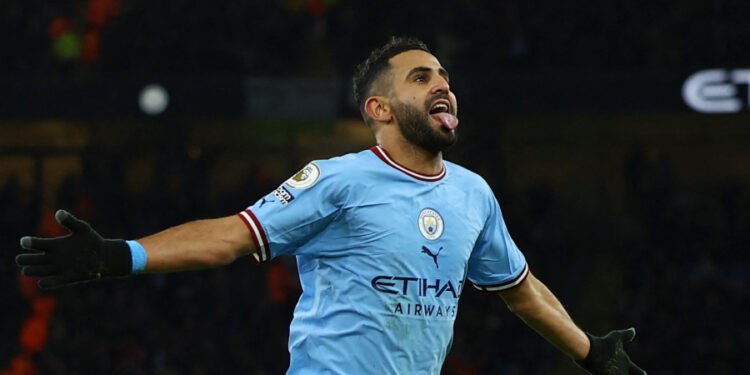 Thanks in particular to a great night Riyad Mahrez, Manchester City reversed the situation this Thursday to win against Tottenham (4-2).

What a show this Thursday evening at the Etihad Stadium! On the occasion of a late match counting for the seventh day of the Premier League, Manchester City and Tottenham crossed swords and offered a meeting with a thrilling scenario. After being led by two goals for more than fifty minutes, the Cityzens reversed the situation to finally win with style (4-2). Riyad Mahrez’s performance has something to do with it.

But before the Algerian international came out of his box, there was the first period. Not necessarily catastrophic for the locals, it still allowed Tottenham to take the advantage. Sharp on their few opportunities, Antonio Conte’s men were able to put two of their three balls on target in the back of the net. They thanked Ederson for this, author of a catastrophic recovery in the axis, allowing Dejan Kulusevski to recover and propel the ball into the back of the net (44th). Then it was Emerson Royal who took advantage of a poor defense boost to double the lead in favor of Spurs (45th + 2).

Quite annoyed on the edge of the field, Pep Guardiola probably found the right words to shake up his troops during the break. And everything changed in five minutes. Julian Alvarez reduced the gap (5th) before Erling Haaland, served by Mahrez, equalized in stride (53rd). On fire, the latter offered the third goal. And not happy to have already been involved in the three goals of his team this evening, the Fennec slammed a double in the last minutes of the meeting (90th).

Note that during the meeting, the French Tottenham did not necessarily shine. If he made a few decisive saves, Hugo Lloris was not faultless in front of his cage, especially on Mahrez’s first goal. As for Clément Lenglet, he is overwhelmed by events on the final goal of the Algerian from City. Thanks to this stunning success (4-2), Manchester City partly erases the disappointment of last weekend and the defeat against the neighbor of United. In the standings, he is five points behind the leader, Arsenal. As for Tottenham, they have a second loss in a row and remain stuck in fifth place in the Premier League.