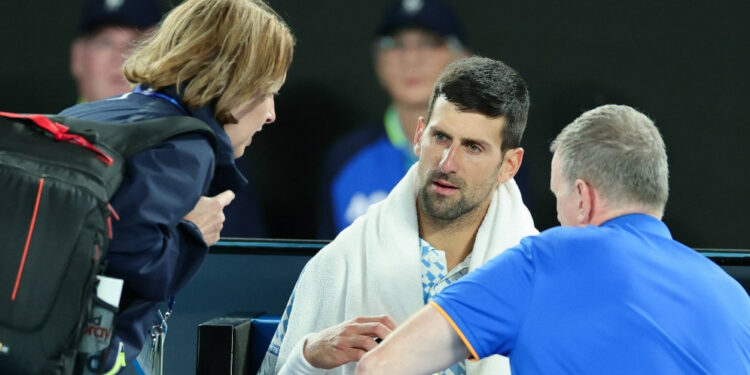 Rather reassuring after his first match, Novak Djokovic was more worried about his left thigh after his victory in four sets over Enzo Couacaud.

It was a worried Novak Djokovic who left the court after his victory in four sets over Enzo Couacaud. The Serb has been injured in the left thigh for several days and he cannot hide it, even if he did not wish to go into details. In his post-match interview on the Rod Laver Arena, after a match won 6-1, 6-7, 6-2, 6-0 in 2:54, the former world No. 1 was not asked about the subject. But at the microphoneEurosportleaving the court, Novak Djokovic did not hide his concern: “ Frankly, to be honest, it’s not very good. I take it day by day. The impression was better in the previous match than today. But maybe I’ll call on God to help me (smiles), or on my physio. I hope I will be able to be ready for the next game. “Tuesday, after his victory in three sets against Roberto Carballes Baena, Novak Djokovic assured that his leg was fine, that he felt better and better throughout the game. *

But this Thursday, the Serb, still wearing a bandage on his left leg, was forced off the court at 5-4 in the second set for treatment, which is not a good sign, even though he has ended up winning this game. ” I’m worried. I had to take a medical time-out but I don’t want to go into details. Two years ago I had a tear in another area. But I was able to win the tournament, ”admitted the Serb at a press conference. Indeed, in 2021, he suffered a third-round abdominal tear against Taylor Fritz. A tear of 1.7 cm at the start, which reached 2.5 cm after his triumph in the final! This injury did not prevent him from beating Fritz, Raonic, Zverev, Karatsev, and finally Medvedev. The nature of his thigh injury is not known precisely, but is Novak Djokovic able to win five games in ten days while being diminished? His 22nd Grand Slam victory would be all the more beautiful…