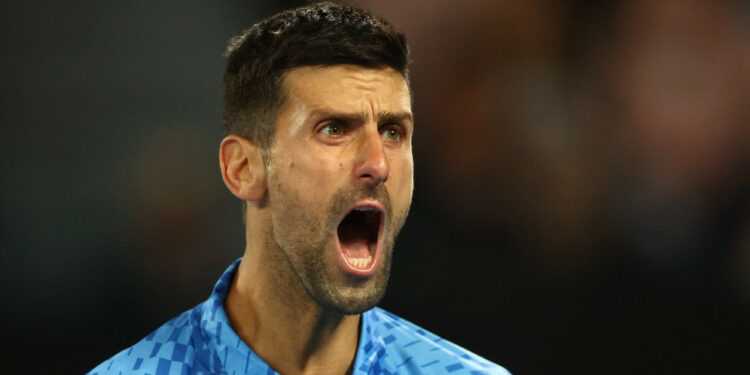 Novak Djokovic won his second round of the Australian Open against Frenchman Enzo Couacaud, in four sets and suffering from his left leg. The Serb will challenge Grigor Dimitrov in the next round.

After his first match, where he had left Roberto Carballes Baena only seven games, Novak Djokovic assured that “his leg was fine”, despite a large bandage on the left thigh. Will the Serb say the same after his victory in four sets over Enzo Couacaud? To see… The man with 21 Grand Slam tournaments, still bandaged during this match, could not hide at the end of the second set: he asked for the intervention of the physiotherapist and went to be treated in the locker room . He was able to finish the game without too many problems, but his physical condition continues to raise questions, while he still has five games to play if he wants to lift the trophy in ten days. This Thursday, the Serb dropped his first set of the tournament, against the 191st in the world, from qualifying, but he ended up winning 6-1, 6-7, 6-2, 6-0 in 2h54.

It all started badly for the French player, who twisted his ankle in the fifth game and had to be strapped. He eventually lost the first set 6-1. But his ankle left him alone in the second set, and he resisted magnificently against the Serb, notably saving a break point at 4-3. Djokovic then went for treatment at 5-4, but that didn’t cut the rhythm of the Mauritius player, who again saved two break points at 5-5. The two players therefore had to play a decisive game, and while Djokovic led 3-0 then 5-4, Couacaud won three points in a row to equalize at one set everywhere, to the delight of his parents, who had made the trip, or Arthur Rinderknech, present in his box. After Tsonga, Monfils and Simon, he becomes the fourth French player to take a set from Djokovic in a Grand Slam, out of a total of 29 matches.

23rd victory in a row at the Rod Laver Arena

But the dream quickly passed for the 27-year-old, who was playing his fourth match in a Grand Slam tournament. Undoubtedly upset to have lost the second set, the Serb won the last two in just 1:11: 6-2 then 6-0. He broke at 1-0 and 5-2 in the third (Couacaud saved four balls from 4-0), then at 1-0, 3-0 and 5-0 in the fourth. In the end, Djokovic finished with 9 aces, 6 double faults, 63 winners and 36 unforced errors. He thus signs his 23rd victory in a row on the Rod Laver Arena, which has become his garden for more than a decade. In the next round, the task could prove more difficult for the Serb, against Grigor Dimitrov (28th), who beat in three sets Karatsev then Djere. The Serb and the Bulgarian have not faced each other since November 2019, and Djokovic leads 9-1 in the confrontations, his only defeat having come on the soil of Madrid in 2013. An eternity…