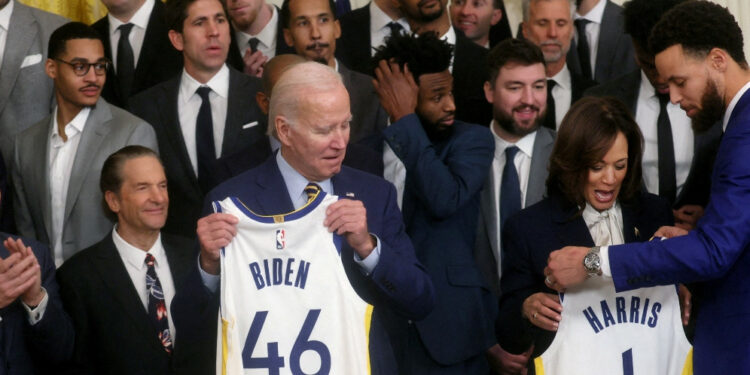 As tradition dictates, the Golden State Warriors, NBA 2022 champions, took advantage of their regular season game in Washington to visit the President at the White House.

The Golden State Warriors return to the White House! When they were crowned champions in 2017 and 2018, the Californians refused to go to the White House, because they did not agree with the policies of the tenant of the moment, Donald Trump. Moreover, no NBA team celebrated its title alongside the billionaire president during his tenure (neither the Toronto Raptors in 2019, although it is not an American franchise, nor the Los Angeles Lakers in 2020). This Tuesday, for the first time since February 2016 and their visit to Barack Obama, the Warriors therefore returned to the White House to meet Joe Biden, as the Milwaukee Bucks had done a little over a year. The day after their 118-127 victory over the Wizards floor, Steve Kerr’s men put on their 31 to go to the White House, a place that Stephen Curry, Klay Thomson or Draymond Green already knew.

The Griner case and the gun problem were brought up

“The Golden State Warriors are always welcome in this White House. The Warriors reflect America with their style of play, showcasing constant movement, with individual freedom and personality that come together as one team, a team that plays with joy, with the desire to be at its best. . (…) Stephen Curry is one of the great sportsmen of our time”, declared in particular the president. The superstar franchise leader thanked Joe Biden for his involvement in the release of basketball player Brittney Griner, detained for many months in Russia. Coach Steve Kerr meanwhile discussed with relatives of the president the subject of firearms, he who had moved the whole country last June by launching an appeal for arms control after a new massacre which left 14 dead in a Texas school. After the strong speeches, the Warriors presented Joe Biden, 46th President of the United States, with a No. 46 flocked jersey, and Vice President Kamala Harris, born in Oakland and a big fan of the team, with a No. 46 jersey. °1. It remains to be seen whether the Californian franchise will return to the White House by the end of Joe Biden’s mandate… For this season, it looks complicated, because the defending champions occupy only seventh place in the Western Conference. , with only 50% of victories and the fifteenth record in the League.