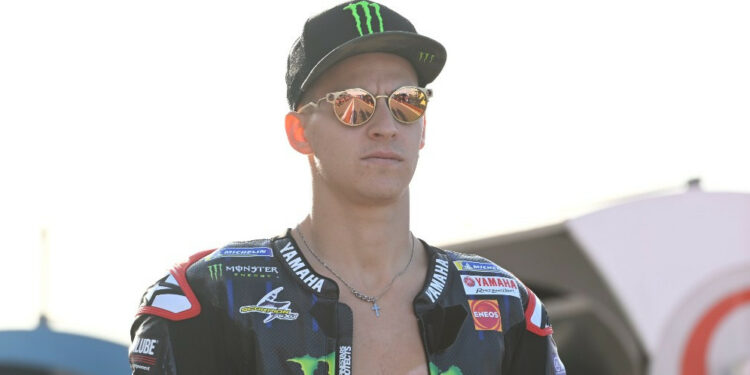 The Yamaha team presented its bike for the 2023 season on Tuesday, and vice-world champion Fabio Quartararo took the opportunity to look back on his winter and discuss his ambitions.

Dominated by Ducati last season, the Yahama team was the first to unveil its bike for the 2023 season, this Tuesday in Indonesia, in the presence of its riders. The bike will be, as tradition dictates, predominantly blue with black, but some gray has been added for this new season. The neon green of the “energy drink” sponsor will always be prominent as well. The French vice-world champion Fabio Quartararo was of course present, and he took the opportunity to discuss his off-season, and his objectives for 2023.

Quartararo: “I just want to fight for the title again”

“My winter break didn’t quite go as planned because I injured my hand during motocross practice, but I kept working tirelessly. I did a lot of cardio to be sure to be 100% for the 2023 season. My hand injury is completely healed now and I feel ready to fight for the title again. We have the new camo livery which is a nice change. I love this new look, and it’s nice to change it up a bit, but more importantly, I can’t wait to start riding again. I am very curious to test the 2023 YZR-M1 at Sepang. We will work hard this season, as we always do. We learned a lot in 2022, and today I just want to fight for the title again. My fans supported me a lot by sending me many messages during the winter. I can’t wait to see them back on the tracks this season. We are going to have a lot of fun! » The tests at the end of last season did not really reassure the 23-year-old from Nice about the power of his Yamaha. Hopefully the Japanese team’s engineers will work hard ahead of testing in mid-February at Sepang and mid-March in Portimao, ahead of the season kick-off on March 26 in Portugal.

Detroit Pistons ‘super excited to be in Paris’

Detroit Pistons 'super excited to be in Paris'