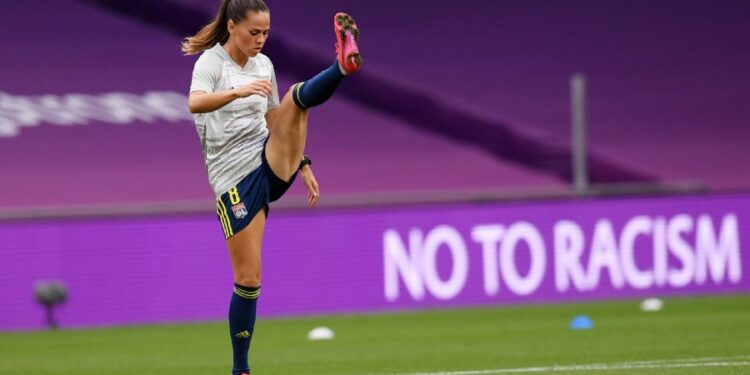 Icelandic international Sara Björk Gunnarsdottir accuses Olympique Lyonnais of having mistreated her during her pregnancy.

Sara Björk Gunnarsdottir is the first player in the history of Olympique Lyonnais to have had a pregnancy during her sporting career and the first mother to win the Champions League. But the beautiful story ends there. The Icelandic international reveals that she came into conflict with the Rhone club following her maternity.

The player tells in her story on the site The Players’ Tribune. She remembers the first weeks of her pregnancy, when her physical condition no longer allowed her to perform on the pitch, and the moment when she announced the news to her teammates.

Gunnarsdottir has chosen to return to Iceland to continue her pregnancy, with the agreement of her club. But everything went wrong when she received her first pay slip, she says. After one or two months when the amount paid did not correspond to his salary, the midfielder contacted OL management. At the end of the third month, Vincent Ponsot, the director of football, replied that the Rhone club had decided to apply French law to lower his remuneration.

This story is bigger than me! It’s a wake up call for all clubs and it’s a message to all players that if they get pregnant or want to get pregnant during their career they have their rights and guarantees!@PlayersTribune @FIFPRO https://t.co/Rnzj7lua9g

However, according to the laws of Fifa, players who become pregnant are guaranteed to keep their salary. When she informed her club that she intended to assert her rights, Sara Björk Gunnarsdottir says she was threatened. “If Sara goes to FIFA with this, she has no future in Lyon”, would have thrown Vincent Ponsot at him.

Very marked by these remarks, Sara Björk Gunnarsdottir nevertheless resumed her career with Lyon, playing a few matches and therefore winning the Champions League in 2022. But she also brought the case before Fifa, which proved her right. She had only received 27,000 euros during this period, while OL owed her 82,000 more.

“This story is bigger than me! It’s a wake-up call for all clubs and it’s a message to all players that if they get pregnant or want to get pregnant during their career they have their rights and guarantees! »pleads the player, who joined Juventus this summer, and who received congratulations from Fifpro, the professional players’ union, for her fight.

The strict application of maternity rights is enforceable.

“FIFA is now criticizing us for not having offered another job to Sara Björk Gunnarsdóttir during her sick leave and then her maternity leave, while at the same time the law forbids us to do so in France and the player had expressly asked us to be able to return to live in Iceland, which we accepted”reacted Olympique Lyonnais in a press release published on Tuesday.

“We are proud to have had Sara Björk Gunnarsdóttir in the Olympique Lyonnais squad. Our paths separated for purely sporting reasons. If she wishes to help us today to further develop French law, we would be happy to be able to involve her in our efforts alongside Amel Majri to enable all athletes to fully experience their pregnancy as well as their return to competition”, adds the club of Jean-Michel Aulas, in reference to the recent return of the French international, she also became a mother.

Bourg continues to shine in Europe