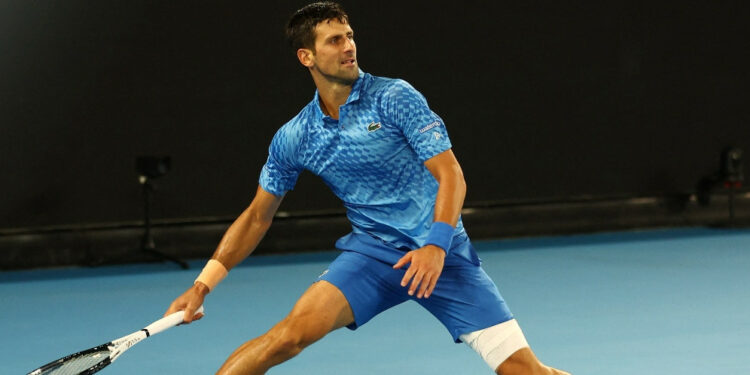 Winner of Roberto Carballes Baena in the first round of the Australian Open, with a bandage on his left leg, Novak Djokovic said he was reassured by his feelings during this meeting.

Novak Djokovic took a test on Tuesday for his comeback at the Australian Open, and it turned out to be conclusive. Not a tennis test, because he was far superior to his Spanish opponent Roberto Carballes Baena, 75th in the world, but a physical test. The Serb, recent winner of the Adelaide tournament, had indeed suffered from his leg for several days, and also wore a bandage under his shorts during the meeting. In a press conference, after his 6-3, 6-4, 6-0 victory in 2:02, the world No. 5 was reassuring.

Djokovic: “The longer the match lasted, the better I felt”

“The leg is fine. It’s still not ideal, but we’re getting there. Today was a good test. I haven’t trained a lot in the last few days as far as tennis is concerned. I was hoping it would go on the court from the first to the last point of the game and it did. I’m very happy because I felt things were going better and better during the game and in the third set the leg was going very well. It’s a good sign. At first I was a little tense, mentally too, because I was trying to protect my leg from something that has been bothering me for ten days. So it took me a little while to really get into the game and start moving quietly. And the longer the match lasted, the better I felt and the better I moved “So good news, in view of his second round against Enzo Coucaud or Hugo Dellien, and especially for the future, he who could face Grigor Dimitrov, then Pablo Carreno-Busta, then Andrey Rublev or Holger Rune during the next laps. But let’s not forget that in 2021, he won the Australian Open despite tearing his abdominals in the third round. A possible 22nd Grand Slam tournament will not be won without suffering…

OL pull out the checkbook for a Brazilian nugget