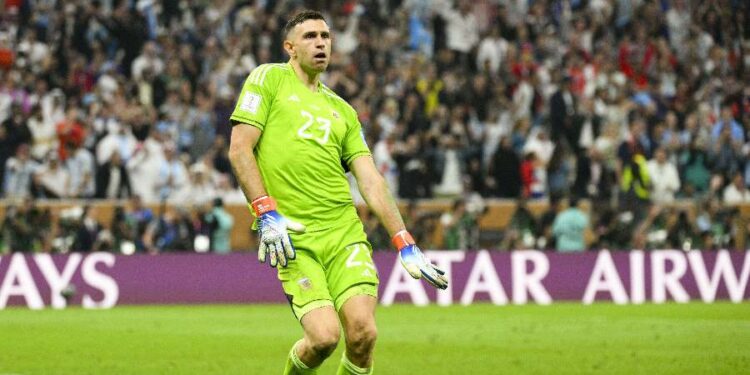 Invited to react to the provocations of Emiliano Martinez after the coronation of Argentina against the Blues, Lionel Scaloni defended him in a surprising way.


Emiliano Martinez achieved a real feat in the World Cup final against the Blues. And not only because of his exceptional save against Randal Kolo Muani in the last moments of extra time or his performance in the penalty shootout. As decisive as he was during the meeting, the Argentinian goalkeeper especially made people talk about him during the celebrations which followed the coronation of Albiceleste, multiplying the provocations.

After an obscene gesture with the trophy for the best goalkeeper in hand in worldview on the platform of Lusail Stadium, the Aston Villa goalkeeper then chained provocations aimed at Kylian Mbappé. An attitude that is worth the former Gunner to be in the sights of Fifa. The international body has indeed announced, Friday, the opening of a procedure against the Argentine selection because “possible breaches of Articles 11 (offensive behavior and breach of the principles of fair play) and 12 (misconduct of players and officials)”.

It’s amazing how good a boy he is

Emiliano Martinez can count on the support of his coach. Asked at the microphone of Cadena Ser, Lionel Scaloni defended his goalkeeper. “He is a spectacular child. It’s a baby, he thus assured. It’s amazing how good a boy he is, you should meet him, said the Argentina coach. He was one of our revelations and he brought us enormous joy. He has a personality that has brought a lot to the group. He has these attitudes, but he’s a baby. »

The Argentinian technician also spoke about his personal future at the head of the Albiceleste. “I will be going to Buenos Aires in the next few days. I hope to sit down with the president of the federation (Claudio Tapia, editor’s note) and see if we can reach the agreement we want“, he announced.