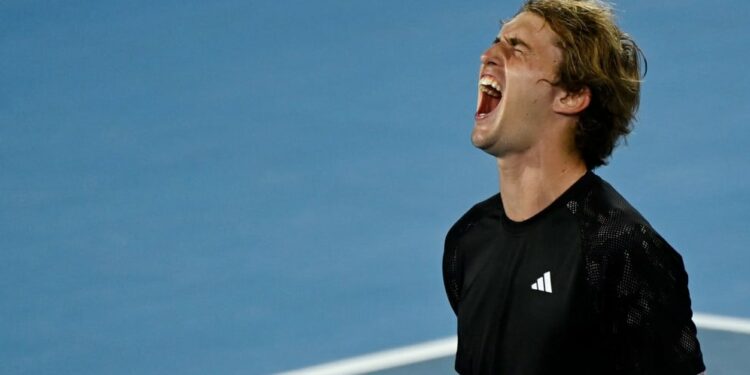 Semi-finalist in 2020 and quarter-finalist in 2021, Alexander Zverev will play the 2nd round of the Australian Open. The German won Tuesday in five sets against the Peruvian Varillas. Since his terrible injury against Nadal, he had not known victory. It must be said that the former world number 2 had only played two games since this semi-final of Roland-Garros against the Spaniard.

Coming very close to defeat on Tuesday in Melbourne against Juan Pablo Varillas, who led 2 sets to 1 after having already won the first set and pushed the German to a decisive game in the 4th set, Alexander Zverev finally went out in five sets (4-6, 6-1, 5-7, 7-6, 6-4) after more than four hours of play. For the seventh time in his life in eight participations, the native of Hamburg, semi-finalist in 2020 and quarter-finalist the following year (2021), will therefore play the 2nd round of the Australian Open. Beyond this success which allows the former world number 2, who has fallen to 13th place, to reach the first round once again during this traditional first Grand Slam tournament of the season, Zverev mainly won on Tuesday at the expense of of the Peruvian ranked 103rd in the world his first victory since his terrible injury against Rafael Nadal on June 4 in the semi-finals of Roland-Garros. It must be said that except for exhibition matches – he returned to competition last December for the Diriyah Tennis Cup in Saudi Arabia, then the World Tennis League, organized in the United Arab Emirates – the German, who would have been able to occupy the first place in the ATP ranking if he had won against Nadal in Paris in June, had only two official matches to his credit since his return to the courts.

A Zverev-Lokoli in the 2nd round?

A comeback occurred during the United Cup, with each time dry defeats for the one who had left the center court Philippe-Chatrier on a wheelchair, against the Czech Lehecka as against Taylor Fritz. It didn’t take long for him to lose for the third time in a row on Tuesday. He finally knew how to avoid this new setback which would certainly have affected him morally, even if he continues to warn his supporters that it will be necessary to wait a while before finding him at his best level. “I am very happy, this match alone is enough to justify all the work I have done,” relishes Zverev, who would take a second victory in the next round. It will be against the American Mmoh or the Frenchman Laurent Lokoli.

Towards another bad news?

Towards another bad news?