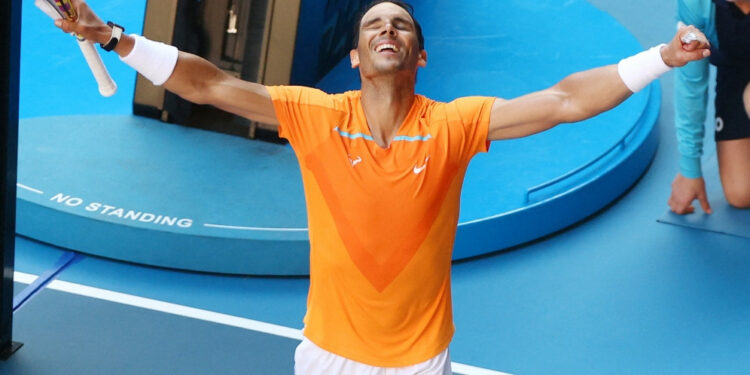 Defending champion in Melbourne, Rafael Nadal started the tournament on Monday with a success in four sets (7-5, 2-6, 6-4, 6-1) against Briton Jack Draper, 40th in the world. The Spaniard will face the American Mackenzie McDonald in the second round.

Soft start for Rafael Nadal (36). Titled in Melbourne last season for the second time in his career, after an epic final against Daniil Medvedev which saw the Russian win the first two legs and get a good match without winning, the Majorcan made a successful debut on Monday against Jack Draper. The world number 2 propelled seeded number 1 of this tournament which he had also won in 2009 following the withdrawal of world number 1 Carlos Alacaraz won in four sets (7-5, 2-6, 6-4, 6-1) against the Briton ranked 40th in the world. Nadal did not make a very strong impression against his 21-year-old opponent. It was also necessary for cramps to paralyze the one who had swept the defending champion in the second set for the Spaniard with 22 Grand Slam coronations to be able to unfold in the fourth set and thus offer himself a quiet end to the match.

Because the rest of the time, Nadal, who still hadn’t won in 2023 (he lost to De Minaur and Norrie in the United Cup), never had it easy against a Draper unable to defend. his chances beyond the first three sets, the fault therefore of cramps but also of violent abdominal pain which also appeared in the last round of this meeting marked in particular by the numerous points offered (46 unforced errors in total) by the protected of Carlos Moya without the Briton having to force. Admittedly, the young dad provided the essentials. He will however have to raise his level of play in the 2nd round against Mackenzie McDonald. Evidenced by the performance of the 65th in the world against another American Brandon Nakashima, 49th in the standings. McDonald, joined in two sets everywhere after winning the first two sets, found the strength to fight back and win in five sets (7-6, 7-6, 1-6, 6-7, 6- 4). Nadal is warned. Especially since he will probably not each time face him a player forced to suddenly abandon any illusions of injury or physical problems.