James close to the record 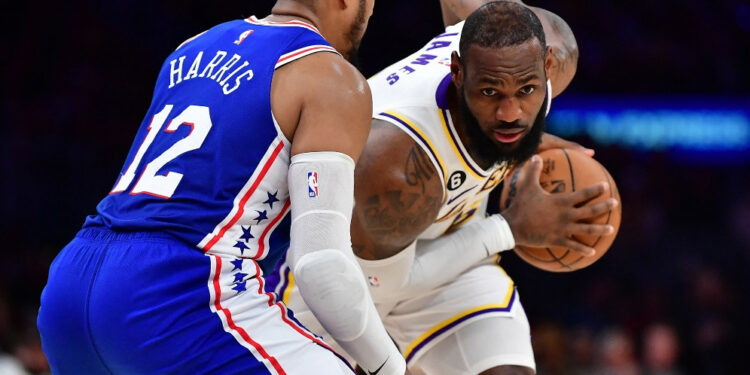 Author of 35 points in the Lakers’ one-point loss to Philadelphia on Sunday night, LeBron James exceeded the legendary 38,000 point mark. Another 365 and the “King” will wipe the legendary Kareem Abdul-Jabbar from the shelves.

LeBron James ever closer to Kareem Abdul-Jabbar. The “King” did not lose everything on Sunday night against Philadelphia. Admittedly, James and the Lakers lost for the third time in a row, by one point (113-112) at Madison Square Garden against the Sixers, following a last controversial action, Russell Westbrook losing the ball after Joel Embiid, who had just scored the winning basket, gave the impression of catching James Harden’s former teammate in Houston by the wrist. Frustrated by this new defeat, James immediately returned to the locker room without even greeting his opponents after the buzzer, as is customary. With hindsight, the Lakers superstar was nevertheless able to savor his evening performance. James, top scorer of the meeting with Embiid (also author of 35 points), had indeed come very close to a new triple-double, with 35 points scored at 15 out of 23 on shots, embellished with 10 assists and 8 rebounds.

In 365 points, James will wipe Abdul-Jabbar off the shelves

The entire NBA focused first on his 35 more points added to the phenomenal counter of number 23, who on Sunday became the second player in history to exceed the mythical bar of 38,000 points. A new high-end copy of James, which allows him to now display 38,023 total career points and thus come back on the heels of Abdul-Jabbar. The latter had indeed 38,087 points when he bowed out on April 23, 1989. At the time, James’ predecessor at the Lakers also had the largest number of blocks (3,189), as well as trophies of MVP (6) and appearances at the All Star Game (19). The points record of the one who also shares with James the record for the number of seasons played in the NBA (20) is only a few outings from the former living God on the side of Cleveland. Another 364 points and James will indeed equal Abdul-Jabbar’s mark. One more point (365) and he’ll wipe it off the shelves.