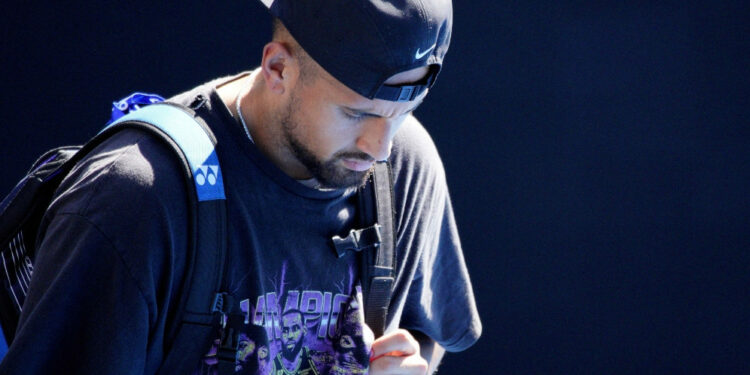 Injured to a knee, Nick Kyrgios will not play this Australian Open which began Monday in Melbourne. The Australian fan favorite has withdrawn.

This Australian Open starts in the worst way for Nick Kyrgios (27). The Australian showman and darling number 1 of the local public was forced to give up without even appearing on the court, where the Russian Roman Safiullin was waiting for him. Injured in a knee, Kyrgios, who announced the bad news during a press conference which he held with the face of the bad days, had to throw in the towel before even making his debut in this tournament which he won in doubles last season alongside his best friend Thanasi Kokkinakis.

Australian spectators were also longing to find the one who had not only delighted the public in 2022, with his blows from elsewhere or his tantrums that have become almost legendary. Last season, “Crazy Nick” also competed with the best and achieved some great performances, notably reaching the final at Wimbledon, for the first time in his life in a Grand Slam tournament before reaching the quarter-finals. of the US Open. Results that suggested he could shine on home soil, where he stopped in the second round last year after his defeat against Daniil Medvedev.

Kyrgios: “I am devastated”

Unfortunately for Kyrgios, who had never missed the Australian Open since his first steps in the tournament in 2014 (he was a quarter-finalist in 2015), he will not have the opportunity. Last week, the Australian tested his knee during an exhibition against Novak Djokovic. The test did not prove conclusive, the 21st in the world therefore preferred not to take the risk of being absent any longer. “I’m devastated because I’m playing arguably the best tennis of my career. It’s just brutal, ”did not hide the favorite player of the Australian public, Monday in front of the journalists. “It’s bad timing, but that’s life, injuries are part of sport. I have no doubt that I will be back at my best”, nevertheless tried to put the player into perspective, who will certainly be missed a lot during this fortnight.

It’s not Paris every day for Jeanjean…

A world champion in turmoil!

A world champion in turmoil!