Day of glory for Lestienne! 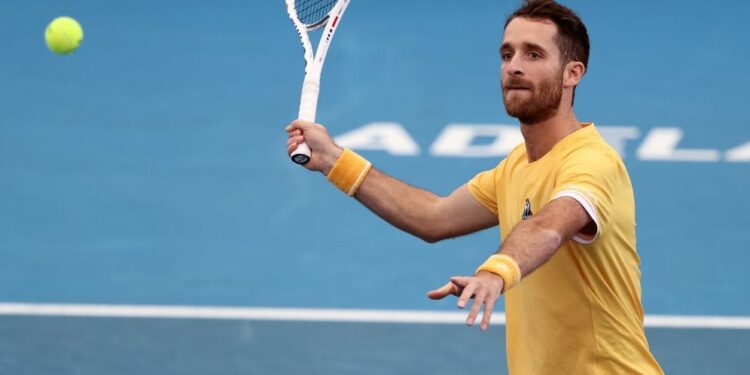 Constant Lestienne, who at the age of 30 is taking part in the very first Grand Slam tournament of his career, this week at the Australian Open, won Monday in three sets (6-3, 7-6, 6-3) against the Brazilian Thiago Monteiro, 77th in the standings. The Amiens will face Cameron Norrie, executioner of Luca Van Assche a little earlier.

First match in a Grand Slam tournament and… first victory for Constant Lestienne. At 30, the Amiénois made his major debut this week in Melbourne for the Australian Open. For his baptism of fire at this level, late in life, Lestienne could not imagine making a small turn and going away with a defeat for his very first Grand Slam match. He therefore endeavored to negotiate his first, against Thiago Monteiro as best as possible. The Brazilian was an opponent perfectly on the ropes for the one who had been forced to give up before playing his semi-final in Auckland against Richard Gasquet, eventual winner of the New Zealand tournament, due to a shoulder problem. A concern that had all of a bad memory only when the thirties appeared on the court on Monday. Again in full possession of his means and very diligent, the ex-player long accustomed to the secondary circuit and who had only discovered the ATP circuit at the end of last season took the upper hand on the 77th in the standings. , beaten in three sets (6-3, 7-6, 6-3) by the Frenchman.

For the feat against Norrie?

Nice victory !
Constant Lestienne qualified for the second round at #AusOpen 🔥 pic.twitter.com/OdoMVX0ADY

The latter easily dominated Monteiro in the first as in the third set, and it was only in the second set, won by Lestienne in the decisive game (7-2), that the Brazilian pushed the 55th world in his entrenchments. . Mission accomplished therefore for the one who had passed last year in the space of only a few months from the 208th to the 65th place in the world. Ten ranks higher still on Monday (his best ranking), the native of Amiens should still climb the rankings, especially if he spends a few laps in Melbourne. The winner in 2022 of the tournaments in Malaga, Pozoblanco and Vancouver will be quickly determined. In the 2nd round, he will face one of the outsiders: Briton Cameron Norrie, 12th in the world. This Monday, the latter had left practically no chance to another Frenchman Luca Van Assche.