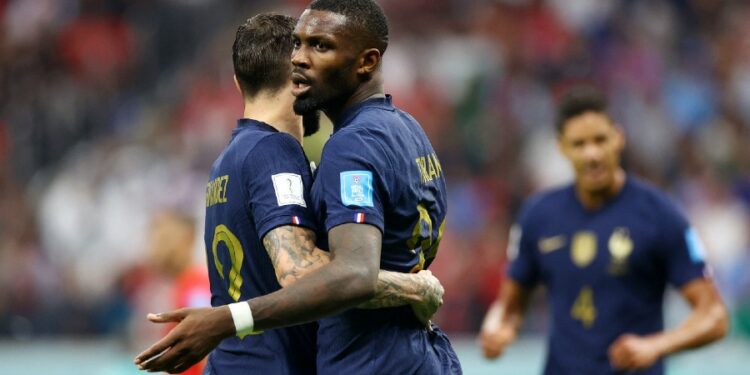 At the end of the contract next June, Marcus Thuram saw Paris Saint-Germain added to the list of clubs following him.

Eldest son of Lilian Thuram, Marcus Thuram is making a name for himself with the general public with his appearances in the France team. Surprised by Didier Deschamps’ list for Euro 2020, the former Guingampais was again invited for the 2022 World Cup, where he did not come to make up the numbers. Helped by the injuries of certain elements, the 25-year-old striker made several notable entries in Qatar, notably during the final against Argentina (3-3, 4-2 on pens).

In the coming months, Marcus Thuram’s reputation could grow even further if he joins a more upscale club than Mönchengladbach. Borussia allowed him to take a step forward, to discover the Champions League, to establish himself as a regular Bundesliga striker. He is even co-best director of the German championship with 10 goals. But the native of Parma could see even bigger in the coming months.

Atlético de Madrid and Inter Milan follow him, and Chelsea had also targeted his profile in their quest for attacking reinforcements, before opting for Joao Félix and Mikhailo Mudryk. But Téléfoot adds a prestigious name, that of Paris Saint-Germain. The capital club, which also appreciates its little brother Khephren Thuram (whom Christophe Galtier knew well in Nice), was seduced by the profile of Marcus Thuram, a versatile striker, who gets along perfectly with a certain Kylian Mbappé, on the field as well as outside.

– Pablo Sarabia: No final agreement yet this morning but PSG and Wolverhampton are close to concluding the deal (Telefoot info revealed on Thursday).

– Marcus Thuram: PSG is monitoring the situation of the vice-world champion, free next June. 1/2 pic.twitter.com/WXLTubrjoR

The fact that Marcus Thuram is out of contract next June at the end of the season is also a good argument, even if PSG could move this winter. Initially, the Ligue 1 leader was not to recruit in January, “except in case of departure”, warned Christophe Galtier. The announced departure of Pablo Sarabia to Wolverhampton could open a door for Marcus Thuram.

On which channel and at what time to watch Real Madrid-FC Barcelona?

On which channel and at what time to watch Real Madrid-FC Barcelona?