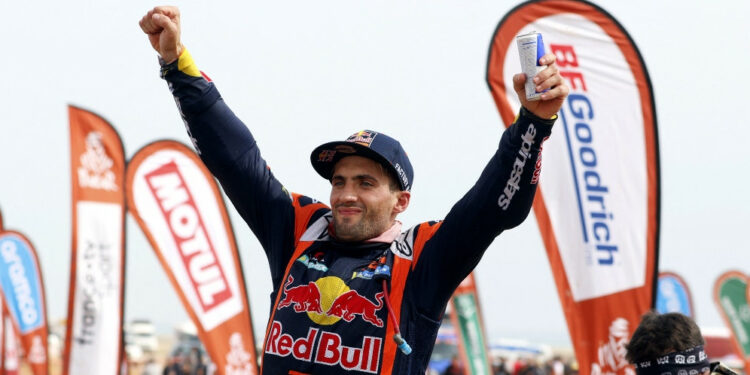 Second in the general classification of the Dakar in motorcycles behind Toby Price before the last day, Kevin Benavides finally won this Sunday’s stage 55 seconds ahead of the Australian and therefore won the rally for the second time in his career.

If the suspense for the final victory on the Dakar quickly disappeared in the car category, this is not the case in the motorcycles, where the winner was not known until the end of the last stage! It was indeed Kevin Benavides who ended up triumphing, winning the final special of 136 kilometers on his KTM. The 34-year-old Argentine driver, winner of Saturday’s stage, was twelve seconds behind Toby Price in the general classification before setting off from Al-Hofuf, on this last day of the Dakar 2023. He therefore gave everything to have no regrets, and it paid off, with another stage victory, 55 seconds ahead of his teammate Toby Price, whom he therefore dislodged at the top of the classification at the best of times. . This is the second victory for Kevin Benavides (whose brother Luciano finished 6th) on the Dakar, after his success in 2021, when he was still at Honda.

For Toby Price, winner in 2016 and 2019, the dream of a hat-trick is gone for this year. He ended up 43 seconds behind Kevin Benavides but more than four minutes ahead of American Husqvarna Skyler Howes, who completed the podium. Adrien van Beveren (Honda) finished fifth and first Frenchman, the third best performance of his career, after his two fourth places in 2017 and 2022. So it’s the end of a thrilling Dakar for motorbikes, which saw ten different riders win at least one stage and the leader of the general classification change six times. See you in 2024!

Dakar: Al-Attiyah wins ahead of Loeb