Dakar: Al-Attiyah wins ahead of Loeb 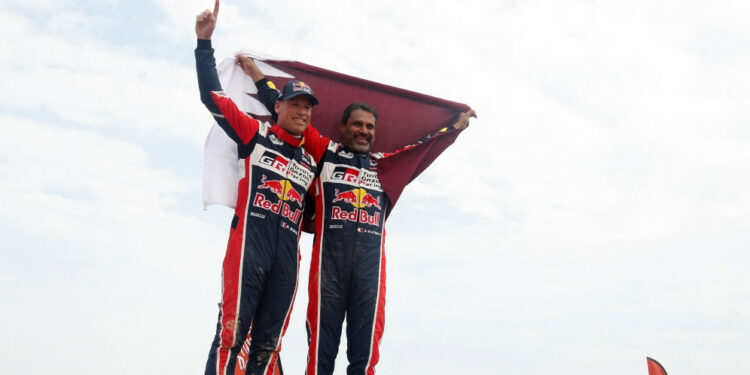 Leaders since the third stage, Nasser Al-Attiyah and his co-driver Mathieu Baumel won the Dakar this Sunday without shaking, with a lead of 1h18 over Sébastien Loeb in the end. This is the Qatari driver’s fifth victory in the biggest rally-raid in the world.

It’s always difficult to stay focused until the end when you have a big lead, but Nasser Al-Attiyah did it magnificently! Since the 6th of the 14 stages on the menu of this Dakar 2023, the Qatari driver has more than an hour lead in the general classification over all his rivals. Suffice to say that he did not take the slightest risk during the second week, and did not make the slightest mistake either. And in the end, Nasser Al-Attiyah won his fifth Dakar (after 2011, 2015, 2019 and 2022) 1h18 ahead of his runner-up, Sébastien Loeb. At 52, the Toyota driver is still at the top of his game, and his French co-driver Mathieu Baumel is also to be congratulated. For him, this is a fourth victory, since he was not alongside the Qatari in 2011.

The beautiful recovery of Loeb

For Sébastien Loeb, the dream of finally winning the Dakar is still over, but there is no doubt that the nine-time world rally champion will keep fond memories of his second week. Already two hours behind after the first three stages due to multiple punctures and mechanical problems, the Prodrive rider (49 next month) quickly said goodbye to his hopes of final victory, but he won six stages in a row to climb from 26th place overall to second to finish. He was also well helped, it must be said, by the withdrawals of Stéphane Peterhansel then Carlos Sainz, and the mechanical problems encountered by Mattias Ekstrom. After 2017 and 2022, it is the third time that he has finished second in the biggest rally-raid in the world. Will he try his luck again in 2024? The podium is completed by the Brazilian Lucas Moraes (Overdrive), only 31 years old and who represents the future of the discipline. Note also the eighth place finish of the second best French driver, Guerlain Chicherit, who also won the final stage.

The drama Westra, who died at 40