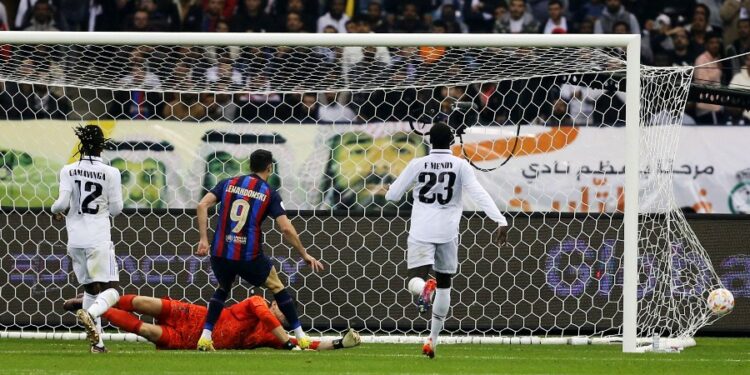 FC Barcelona scored two goals in the first half of the Spanish Super Cup final against Real Madrid on Sunday night in Saudi Arabia.

Dominating against Real Madrid in the Spanish Super Cup final, this Sunday evening in Riyadh, during this Final Four organized in Saudi Arabia, the FC Barcelona found the flaw half an hour into the game.

After a high recovery from Sergio Busquets, Robert Lewandowski shifted Gavi into the box. The Blaugranas midfielder escaped the return of Daniel Carvajal to deceive Thibaut Courtois (33rd).

Opening of the scoring by Gavi against Real Madrid! #The classic pic.twitter.com/5GheNSokwu

Just before the break, this same Gavi was launched in depth by Frenkie De Jong before serving “Lewy” for the goal of the break (45th). On this action, the Madrid midfielder is sucked into Xavi’s formation and the defenders are completely lost.

The Merengues had not materialized their rare opportunities in counter-attack until then, in particular twice by Karim Benzema.

Blanc already in turmoil in Lyon

Blanc already in turmoil in Lyon