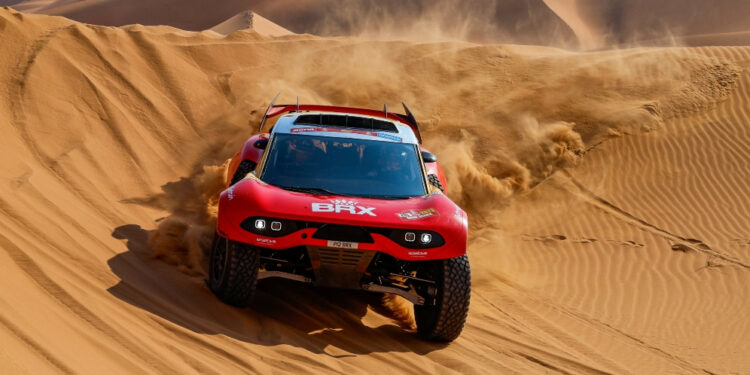 Sébastien Loeb won his fifth stage victory in a row on the Dakar and took second place in the general classification from Lucas Moraes. In the motorcycle category, Toby Price took the lead, but he was only 28 seconds ahead of Skyler Howes heading into the final weekend.

As Johnny Hallyday would have said so well, if he had not lost two hours during stages 2 and 3 (punctures then mechanical problems), Sébastien Loeb would have arrived two hours earlier and would be at the top of the general classification of the Dakar. . The Alsatian driver has very little chance of catching up during the last weekend, but we can’t blame him for giving everything. Twenty-sixth in the general classification at the end of the 3rd stage, the Prodrive driver is now second, after having signed his fifth stage victory in a row. Unleashed, the nine-time world rally champion continues his crazy comeback (14th after stage 4, 6th after stage 6, 4th after stage 8, 3rd after stage 9), which should bring him to the second step of the final podium on Sunday. Friday morning, before starting the second part of the marathon stage in the Empty Quarter, one of the largest deserts in the world, without technical assistance and overnight in tents, Sébastien Loeb was nine minutes behind Lucas Morae. But he won the 183 kilometer stage with more than eleven minutes ahead of the Brazilian, and here he is second overall. The leader Nasser Al-Attiyah, with more than 80 minutes ahead of his rivals, did not take any risks and keeps a comfortable mattress in advance, before the last 290 kilometers. But it is of course not immune to an accident or breakdown.

In the motorcycle category, this penultimate stage was an opportunity to witness a change of leader. Always well placed but never first during this 2023 edition, the winner of the 2016 and 2019 Dakars took control. While he was 28 seconds behind Skyler Howes at the end of the first part of the marathon stage, the Australian pilot was 56 seconds ahead of the American pilot, and it is therefore he who is now ahead of his rival by 28 seconds! This promises two last stages of madness! This stage on Friday was won by Jose Ignacio Cornejo, but the Chilean is far behind in the general classification: 8th at 23 minutes. The best Frenchman remains Adrien van Beveren, still fifth.