Loeb does not stop! 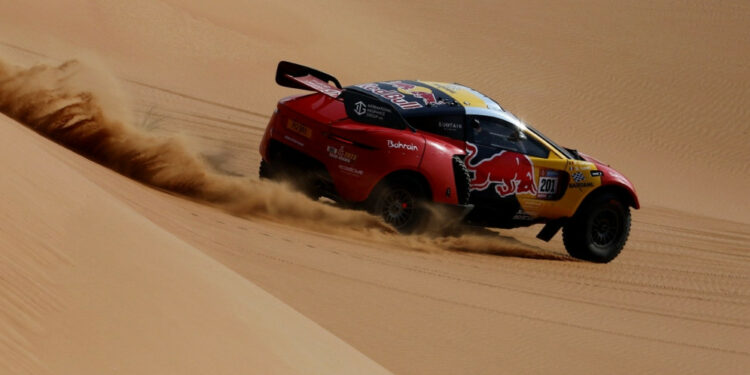 Sébastien Loeb won his fourth stage in a row on the Dakar and can still hope to finish second, the final victory seeming promised to Nasser Al-Attiyah, barring a major problem. On the bikes, Luciano Benavides won this 11th stage and the suspense is still in order, because Toby Price took time from the leader Skyler Howes.

Sébastien Loeb is in great shape in this second week of the Dakar, a pity that he lost a lot of time during the first… The Alsatian driver won his fourth stage in a row on Thursday, at the end of this 275 km special arriving in the famous “Empty Quarter”, one of the largest deserts in the world, and where there will be no assistance at the finish as it is a marathon stage, with 183 kilometers still to be covered on Friday. The nine-time world rally champion had an uneventful day and won 2’16 ahead of another Frenchman, Guerlain Chicherit, and 2’26 over Sweden’s Mattias Ekstrom, which gives Audi some color even if he is very far in the general classification. Large leader, defending champion Nasser Al-Attiyah took no risk and finished nearly seven minutes behind Loeb. Overall, the Qatari now has a 1h21 lead over Lucas Moraes and 1h30 over Sébastien Loeb. He therefore has plenty to see coming during the last three stages, even if an accident or a mechanical problem can also happen to him. In the absence of suspense for the final victory, it is the race for second place which should hold the attention in the car category, since Loeb took six minutes from his Brazilian rival Moraes and given his last performances, he has more than capable of finishing second to Al-Attiyah on Sunday.

On the motorbike, on the other hand, the suspense is in order for the final victory. It is always the American Skyler Howes who leads the debates, but he is only 1’38 ahead of Australian Toby Price, who took 18 seconds from him on Thursday. The stage was won by Argentinian Luciano Benavides, sixth overall. His brother Kevin is in third place, 2’44 behind Howes and should not, a priori, be able to get involved in the fight for the final victory. On the French side, the best driver is still Adrien van Beveren, fifth overall.