Big tension within the staff of the Blues! 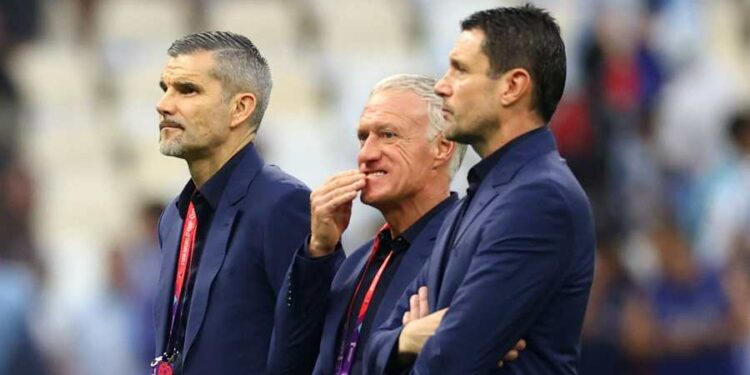 The goalkeeping coach, Franck Raviot suffered heavy criticism because of his wife.


Didier Deschamps was not the only one to extend his contract at the head of the Blues. Assistant coach Guy Stéphan, goalkeeping coach Franck Raviot and physical trainer Cyril Moine are also continuing their mission. The ears of the second named have nonetheless whistled in recent months at the Federation. The fault of his wife, the former player Aline Riera.

Read also:Deschamps, the earthquake?” Shut up ! “, big altercation at the FFFAulas hot on Deschamps!

The former international (59 selections) is indeed close to Florence Hardouin, the now former director general of the French Football Federation, laid off this Wednesday at the end of the Executive Committee of the FFF. According to RMC Sport, this proximity would not be without problems. “It was not without causing some problems, since she is close to Florence Hardouin, enemy of Noël Le Graët. For quite a while, she was sending France team info to Florence Hardouin, who had been dismissed from the France team by Didier Deschamps and Guy Stéphan. It banged on the table with basically ‘tell your farm to shut up’. Roughly speaking, it’s a bit like the tenor of the discussions,” revealed Daniel Riolo.

The case of Aline Riera is all the more talked about as her role within the Comex is vague to say the least. The former defense joined the Comex after the departure of Brigitte Henriques for the CNOSF. “She inherited the role of treasurer in spite of herself and never presents the accounts of the FFF in assembly”, assured L’Equipe this Wednesday, adding: “she was chosen by Le Graët because, for the president, she is part of “the family” as a companion of Franck Raviot. ”

Nadal with Tsitsipas, Djokovic with Ruud

Nadal with Tsitsipas, Djokovic with Ruud