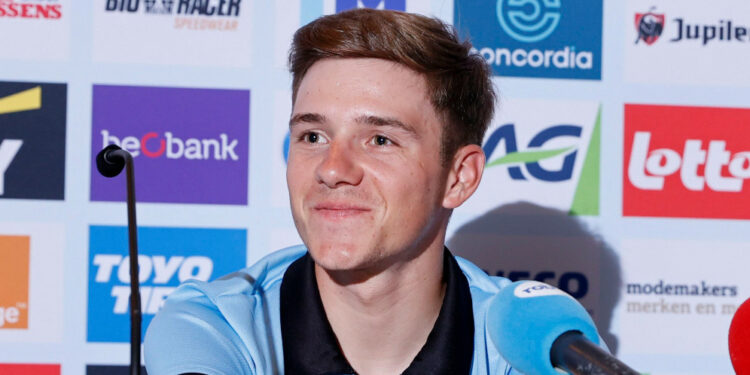 As they meet on the roads of the next Giro, Remco Evenepoel assured that Primoz Roglic will be one of the main rivals and that he will have to watch him closely at all times.

Remco Evenepoel will discover a new pressure. If he was a rising star in world cycling, the Belgian’s status changed with his victory at the last Vuelta. A race during which he was able to closely observe Primoz Roglic, who will be one of his rivals in the Giro 2023. But, at first, he did not expect the presence of the Slovenian. ” First of all I was surprised because the week before the announcement he was not going to, he confided on the sidelines of the presentation of his Soudal-Quick Step team. So it was quite special to read that he was going to be at the start but I am happy that Primoz Roglic is coming to the Giro. » After the end of the season truncated by a shoulder operation, the rider of the Jumbo-Visma team intends to return to his best level… and Remco Evenepoel too. “I hope he can have a good preparation and that he has recovered well from his shoulder injury,” said the Belgian. I hope everyone can be at their best and that it will be a good battle on a very difficult course. »

Evenepoel: “He is not afraid”

The rider of the Soudal-Quick Step team does not hide it, he is wary of Primoz Roglic in view of the next Giro, assuring thathe “will be the best Grand Tour rider at the start of the Giro”. Nevertheless, Remco Evenepoel is delighted to find the Slovenian and intends to learn the lessons of the last Vuelta. ” He is not scared. He really wants to take the necessary risks to regain time and he can do it on all types of terrain, whether it is a final for a puncher, uphill and even on the flat, summed up the Belgian. He is very strong and fast in the sprint. He can take time wherever and whenever he wants. This is something to be careful of. “As for his personal ambitions, Remco Evenepoel pours into modesty, assuring that” the main objective will be to go for a stage victory “. While his victory on the Spanish roads makes him a favourite, the Soudal-Quick Step team rider assures that anything can happen on a Grand Tour. ” But, if you finish with a stage victory, you still have a successful Grand Tour “, he concluded.

With or without Lovren, OL are not moving forward