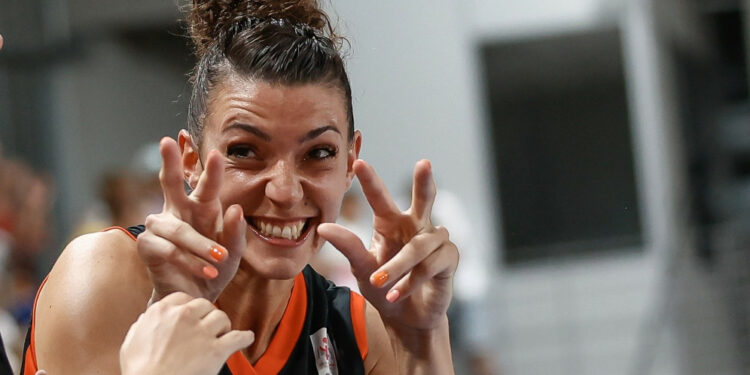 At the end of the extension, Basket Landes found the resources to take the best of Salamanca (71-64 ap) and return to victory in the Euroleague. Bourges, long hooked by Virtus Bologna, ended up winning (79-74).

Basket Landes seized his chance. Faced with a Salamanca team in difficulty with two consecutive defeats in the Women’s Euroleague, the Landaises had the opportunity to raise their heads, they who remained on three straight losses on the continental scene. However, after a very tight first quarter during which neither team had more than a two-point lead, the Spaniards raised their voices. Led by Michaela Nne Onyenwere (18 points, 9 rebounds), Salamanca inflicted a 10-0 on Basket Landes at the start of the second quarter. An ascendant that Roberto Iniguez’s protégés consolidated with a 12-2 just before half-time, achieved with a difference of fifteen lengths. Back on the floor, Julie Barennes’ players tried to react but Salamanca did not give up and the gap did not move ten minutes from the end of the match. It was then that the Spaniards were out of the match. Indeed, if the latter scored the first three points of the last quarter, they then conceded an 18-0. Under the impetus of an untenable Marine Fauthoux (25 points, 8 rebounds), Basket Landes came back from nowhere before snatching the extension. Five extra minutes that were on the run from the end of regulation time. The Landaises imposed their game to win by seven lengths (71-84) and regain hope for a continuation of the European course this season.

Bourges did not give in

Bourges didn’t have an easier game when they received Virtus Bologna. The Italians, driven by former Tango Iliana Rupert (18 points, 10 rebounds, 5 assists), raced in the lead from the first moments of the game. But, unable to take more than five steps ahead, they remained within reach of the Berruyères. The result was a first quarter concluded on a parity score. The ten minutes leading up to half-time saw both sides have their own series. But, in the end, it was Virtus Bologna who took control on the scoreboard, with a margin of four units when they returned to the locker room. Very quickly led by seven points, the Tango replied to quickly equalize but without however managing to take the advantage. Two last free throws allowed the transalpine formation to approach the last quarter with a narrow lead. Ten final minutes which turned into a crossover, Laëtitia Guapo (19 points, 5 assists) and the Tango managing to pass in front of the approach of the “money time”. An end to the match at loggerheads marked by a good number of free throws which allowed Bourges to turn the match in his favor (79-74). A second victory in a row which allows Tango to move back to fifth place in their group.

Villeneuve d’Ascq was able to reverse the trend. After their six-point defeat in London in the first leg, Rachid Meziane’s players waited until the last quarter to crack the Lions. Thanks in particular to an impressive Kennedy Burke (34 points, 10 rebounds), the ESBVA went for a success of thirteen lengths (77-64) and therefore its qualification for the round of 16 with a margin of seven units (148-141 ) with the Hungarians of Pecs who will be on their way. Charleville-Mézières, for its part, with the cards in hand after its success of three units on the move on the floor of Kibirkstis Vilnius. Nikolina Milic’s teammates (20 points, 5 rebounds) never left any hope of returning to the Lithuanians. A second success without firing a shot (82-59) allows the Flames to also reach the round of 16 (150-124) with La Seu d’Urgell or Benfica who will be their opponent.

Lens loses points, Lorient and Monaco neutralize each other