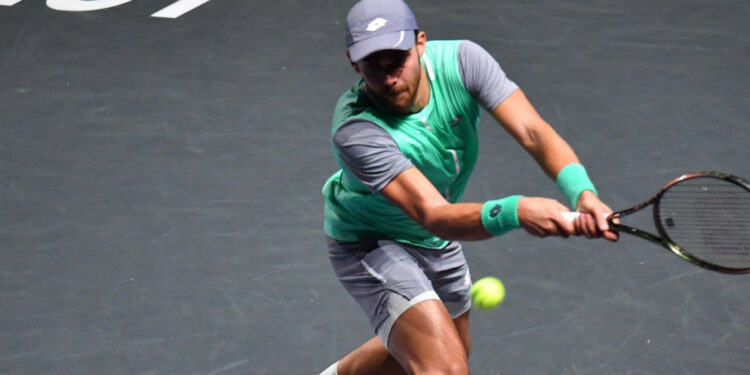 Benjamin Bonzi, finalist in Pune this weekend, should have started the Adelaide tournament on Tuesday against the American Maxime Cressy. Finally opposed to the Dutchman Robin Haase, 257th in the world, the French lost 7-6 in the third set (3-6, 7-6, 7-6), despite a match point in the decisive game of the 2nd set.

Back to earth for Benjamin Bonzi. Three days after having played, in Pune (India), his very first final on the ATP circuit, unfortunately lost, in three sets, against the Dutchman Tallon Griekspoor, the French hero of the weekend flew to Australia in a week before the start of the Australian Open to continue his preparation there, during the Adelaide 2 tournament. Originally, the Gardois returned to the top fifty in the world on Monday after his very good week in India should have made his debut against the American Maxime Cressy, 39th in the standings. The great Franco-American server finally had to give up and it was against another Dutchman Robin Hasse that Bonzi finally made his entry into the running on Tuesday. And, decidedly, it is not good to face representatives of the Netherlands lately for the protege of Lionel Zimbler, who lost again, moreover still in three sets (3-6, 7-6, 7 -6) against the ghost Haase, who had not played a match on the main circuit since last June and his defeat on the turf of s’Hertogenbosch against Sam Querrey. After qualifying in Adelaide, the 35-year-old Dutchman, winner of 7 titles on the circuit and 33rd in the world at the height of his ranking, has been a subscriber to Challenger tournaments for a while.

Once again, Bonzi missed his chance

This did not prevent him on Tuesday from bringing down Bonzi, who nevertheless imagined himself to be chained after his lost final in Pune. The Stade Toulousain player had the opportunity. After winning the first set quite easily, he indeed made the entry break in the next round. Eventually joined, Bonzi later secured himself a match point in the tiebreak. He did not know how to seize his chance, just as he did not manage to maintain his break lead in the last set before losing the second decisive game of this match quite dryly. Let’s hope for Bonzi that this new defeat while the victory was reaching out to him will not come to put a big mental blow to him at the dawn of the Australian Open.

Lloris, a new snub for Benzema