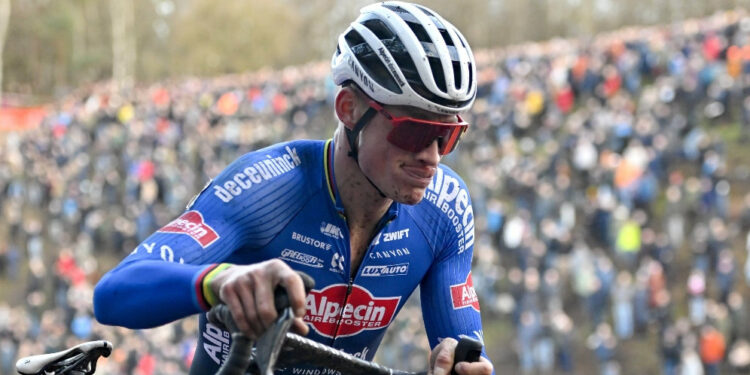 Second in the Zonhoven Cyclo-Cross World Cup stage on Sunday far behind Wout Van Aert, Mathieu van der Poel is currently not at 100% of his means because he is suffering from back pain.

The years follow and look alike for Mathieu van der Poel. A little over a year ago, the Dutch rider had to end his cyclo-cross season earlier than planned because he suffered from knee pain, then from his back. This year, the quadruple world champion in the discipline is not yet at this stage of despair, but he still suffers from his back. Victim of two falls on Sunday during the World Cup stage in Zonhoven (Belgium), the rider from Alpecin-Deceuninck finished second, but far behind Wout Van Aert. He explained after the race that he could not concentrate as he wanted: “It’s not going as I would like. I still have back pain and it’s a little frustrating. The only thing I think about is my back hurting, and you have to be 100% focused on the course, and I just can’t do that. I can maybe do a U-turn at the pace I want, but then I have to hold back because of the pain, it’s super frustrating. The public has been a help here in Zonhoven, but it’s not fun to do cross country at the moment.”

From this Monday, Mathieu van der Poel (soon to be 28) will join his team for a training camp in Spain, and he must get back on his cyclo-cross bike in two weeks in Benidorm (Spain) for a stage World Cup in order to better prepare for the World Championships on February 5. Last year, due to his back and knee problems, the Dutchman was only able to start his road season on March 19 at Milan – San Remo. This year, he is supposed to participate in the Tour of the United Arab Emirates from February 20, but will he be in physical condition?

Malinovskyi at OM, it's signed!