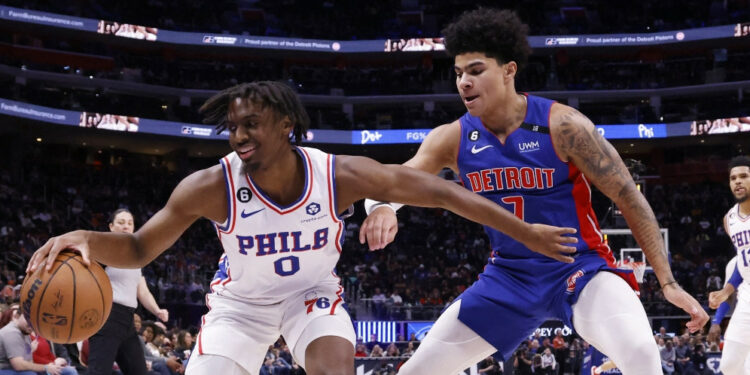 At the start of the season, Killian Hayes was criticized for his lack of skill, his success percentage was one of the worst in the NBA. But that was before… If the results of his Detroit team are not better, the 21-year-old French leader has clearly raised his level. And it was seen again this Sunday, in a game that started at 3:00 p.m. local time, and which saw the Pistons face Philadelphia. The 76ers, deprived of Joel Embiid, won 111-123 in Michigan (23pts for Maxey, 20pts, 11rbds and 11pds for James Harden) leading almost from start to finish, but Killian Hayes equaled his points record in career. The n ° 7 of the 2020 Draft scored 26 points, 11 out of 17 on shots, including four out of eight at 3 points! He also added six assists, three steals and a block. His last game with 26 points dates back to the end of last season, when Detroit won against Oklahoma City (a game where another Frenchman, Théo Maledon, had scored 28 points). This season, his record was 25 points, in a win over Charlotte.

Hayes has the keys to the Pistons

Substitute for the first thirteen games of the season, where he sometimes did not score a single point in more than 16 minutes of play, Killian Hayes entered the Pistons’ five major on November 12 and has not left it. He still had a few air holes, but his average was all the same, before this game on Sunday, 9.3 points and 5.5 assists in 39 games since the start of the season. He only missed three games, when he was suspended for his punch. With team star Cade Cunningham, No. 1 in the 2021 Draft, out until the end of the season, Killian Hayes has the keys to the Pistons’ game, and he’s enjoying it. Unfortunately, that doesn’t translate into results, as Detroit is still last in the Eastern Conference, with 11 wins to 32 losses. There is no doubt that French NBA fans will give their Frenchie a nice ovation during the match in Paris on January 19 against Chicago!