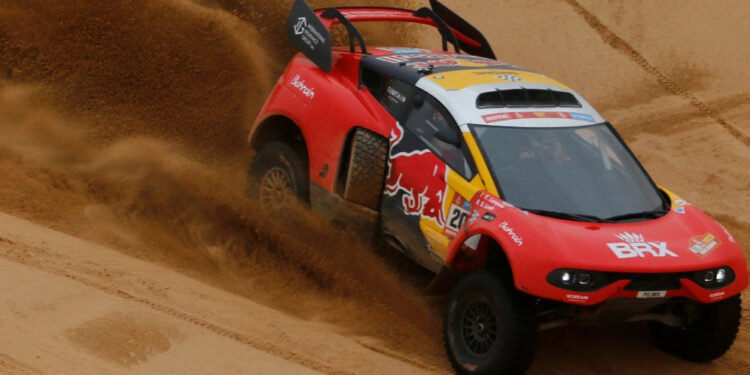 This Sunday, the eighth stage of the 2023 edition of the Dakar was won by Frenchman Sébastien Loeb in the car category and Botswanan Ross Branch in the motorcycle category.

Sébastien Loeb had the last word. For the second time since the start of this 2023 edition of the Dakar, the 18th in all. This Sunday, the Frenchman (Prodrive) won the eighth stage in the car category, after a total of 822 kilometers of effort in valleys but also sand, between Al-Duwadimi and Ryad. On arrival, the Alsatian is ahead of Nasser Al-Attiyah by two minutes and eleven seconds. As for the podium of the day, it is completed by the Spaniard Carlos Sainz, at the wheel of his Audi hybrid, which ends up three minutes and 31 seconds behind the winner of the day. This stage was particularly hotly contested as the rest day looms on Monday. This final result of the day does not change anything in terms of the general classification. The title holder, namely the Qatari Nasser Al-Attiyad, remains leader of the general classification and still has a total of one hour and 52 minutes on the Habs.

The eighth stage of the 2023 edition of the Dakar, among motorcycles, also delivered its verdict this Sunday. It was the Botswanan Ross Branch, on his Hero, who had the last word, in a day which saw the motorcyclists link Al-Duwadimi to Riyadh, in valleys of stones as well as massifs of dunes. And the day after the cancellation of the seventh stage, which should have taken place this Saturday. A cancellation due to torrential rains which notably damaged the roads. Branch is ahead of Australian Daniel Sanders (GasGas), back to the front with this second place, after being ill during the sixth stage. On arrival, his delay was three minutes and fifteen seconds on the winner of the day. However, it was indeed the American Mason Klein who then crossed this famous finish line in second position, one minute and 33 seconds behind Branch. With his eight minutes and 31 seconds of bonus, for having often opened the track, the American had, at first, been announced as the new leader of the general classification. Finally, two minutes of penalty were inflicted to him, because of an excess of speed. A sanction which made him demote to third place in the classification of the day, as well as the general where he finds himself at the same time as the second, namely the Argentinian Kevin Benavides (KTM). At the level of the general classification, the American Skyler Howes (Husqvarna) retains the lead, with one minute and thirteen seconds ahead, as the rest day looms on Monday.

Hamraoui reveals his “story” in video