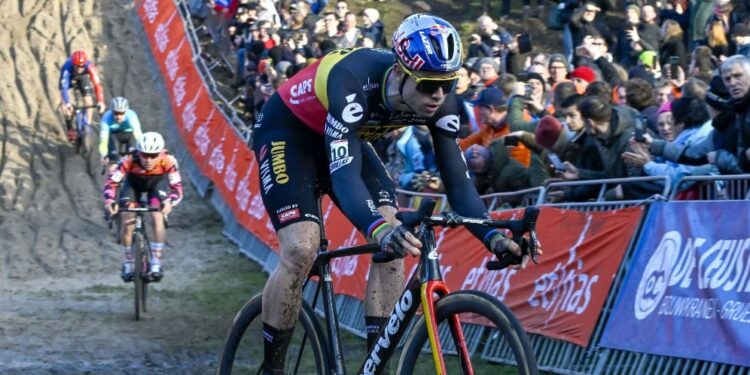 Belgian Wout Van Aert won the twelfth round of the Cyclo-Cross World Cup on Sunday in Zonhoven, beating his great rival Mathieu van der Poel by more than 80 seconds.

Eighth victory this season in cyclo-cross for Wout Van Aert! The Belgian from the Jumbo-Visma team is indeed the best runner in the mud this winter, and he showed it once again by dominating Mathieu van der Poel this Sunday in Zonhoven in Belgium on the occasion of the twelfth round of the World Cup. The Belgian notably took advantage of the two falls of his Dutch rival during this eight-lap race where the green jersey of the last Tour de France better managed the sandy parts. The first fall occurred on the first lap, but van der Poel, in the company of Michael Vanthourenhout, was able to catch up with Van Aert, who had started alone.

Then the Belgian champion took advantage of a sandy part to attack again, and “VDP” was the only one who managed to come back on him. We were then in the third lap, and it was then that Raymond Poulidor’s grandson suffered his second crash. Van Aert was then able to fly to victory, quickly counting more than a minute in advance. Van der Poel managed to give way to those who had joined him, and he finally finished 1’23 behind the winner of the day, and eight seconds ahead of another Belgian, Laurens Sweeck. At the finish, the Dutchman said he suffered from back pain and it was not easy for him to concentrate on the race.

See you in Benidorm in two weeks!

Wout Van Aert signs his second success in the World Cup this year (after that in Dublin on December 11), while Mathieu van der Poel has three successes in this category. But it’s still Laurens Sweeck who leads the standings with two rounds to go (Benidorm in Spain on January 22, then Besançon on January 29) with a good lead. Van Aert and Van der Poel will now spend some time on the road with their respective teams, and should be back in Benidorm in two weeks. The objective remains of course for the two men the Worlds of Hoogerheide on February 5th.

OM have their reinforcements!

OM have their reinforcements!