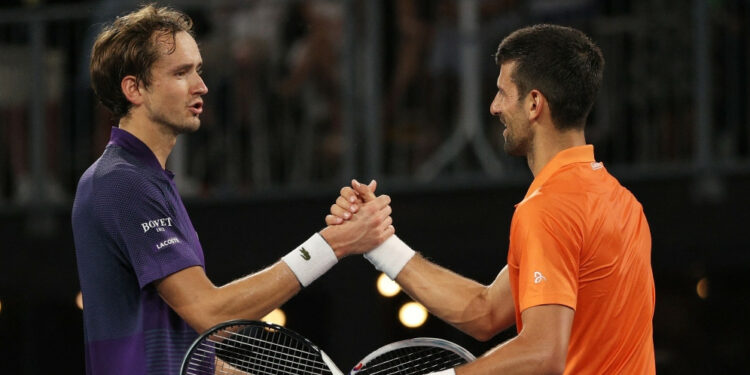 Opposed to Daniil Medvedev in the semi-final of the Adelaide tournament, Novak Djokovic beat the Russian in two sets, and will therefore play the 131st final of his career on Sunday, against Sebastian Korda.

Ninth victory in a row for Novak Djokovic, who is starting 2023 as well as he finished 2022 (victory at the Masters). The Serb qualified for the final of the Adelaide tournament, of which he is the No. 1 seed, by defeating Daniil Medvedev in the clash between two former world number ones. Winner of his last three matches against the Russian, the man with 21 Grand Slam tournaments added a fourth victory to his list, winning 6-3, 6-4. Novak Djokovic was particularly intractable in service, serving five aces and saving the three break points that his opponent got. The Serb took the opposing serve on his second chance, at 2-1 in the first set. He then gave himself a scare by twisting his leg, which caused pain in his adductors, but he returned to the court after being treated for a few moments. In the process, “Nole” saved a break point at 5-2, then managed to conclude. In the second set, after six fairly quick first games, the world No. 5 broke on his first chance of the set, at 3-3. In the process, Medvedev got two balls from 4-4, but the Serb saved them, before winning a few moments later. Djokovic, who continues to collect valuable points (already 150 this week) while he has none to defend until the end of February, therefore qualifies for the 131st final of his career, and will aim for a 92nd title. Mind-boggling numbers!

On Sunday, he will face world No. 33 Sebastian Korda for the first time in his career. The American took advantage in the semi-finals of the abandonment of the Japanese Yoshihito Nishioka, ranked three places behind him. Petr’s son won the first set 7-5 in the tie-break, but his opponent then threw in the towel at 1-0 in the second, as he suffered from right hip pain. Qualified for his sixth final, the 22-year-old will aim for his second title (after Parma 2021), but the task promises to be tough.