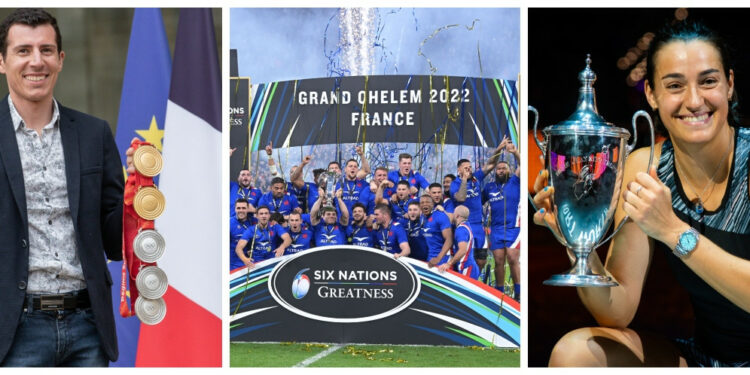 The year 2022 has been rich in sporting events. Sports stars, French or foreign, have impressed or disappointed us. On this last day of the year, the editorial staff gives you its French Top 5 of 2022 (excluding football).

The year 2022 will go down in the annals of French rugby. First of all thanks to the Grand Slam achieved by the XV of France in the 6 Nations Tournament. Twelve years that the Stade de France public has been waiting for this. This 10th round without fault of the Blues, against the nations of the British Isles and Italy, has also contributed to the new record of consecutive victories of the French team on the international scene. The series of ten rank successes acquired in the 1930s has been erased from the shelves in favor of the thirteen triumphs of the band of Fabien Galthié. The last three, signed during the autumn tour, are also of particular importance. After dominating Australia in Saint-Denis in the final minutes of the match (30-29), the French offered themselves the scalp of another major nation in the Southern Hemisphere: the Springboks (30-26). Facing the reigning world champions, the Blues suffered but ended up winning this trench battle, with character and in unusual conditions (a red card on both sides). Following this fight of titans, the level demonstrated was confirmed at the end of this window by a victory against Japan (35-17), thus extending to 13 the current series of victories of the XV of France. A record that Antoine Dupont and consorts will be able to push even higher in 2023, during the next Tournament from February.

He was the strongest, on skis and shooting. Quentin Fillon Maillet is coming out of a radiant year 2022 which saw him write the history of the French delegation to the Beijing Olympics. Returning from the Chinese capital with five medals including two gold in the individual and the pursuit, “QFM” became the first tricolor athlete to obtain five charms in the same Winter Olympics. Repeated exploits which logically earned the biathlete the title of flag bearer for the closing ceremony. Coming back to practice, Fillon Maillet’s 2021-2022 season was his career best. The Frenchman seized a master hand of the big crystal globe of the World Cup with nearly 250 points ahead of his first pursuer, Sturla Holm Laegreid. He thus became the first Frenchman to win the World Cup since Martin Fourcade’s seventh consecutive crown in 2018. Mainly dominating in the sprint and the pursuit, with three and five successes respectively, he also won the small globe of these two exercises and even came close to victory in the mass start, where Johannes Boe took the lead by just four points. In addition to his many victories, Quentin Fillon Maillet has also been on the podium five times individually and three more in the relay. He carried the French biathlon more than ever in 2022.

For several years, French tenniswomen used to appear in our “flop” section. But in 2022, the light came from Caroline Garcia. Injured in one foot and lacking confidence during the first five months of the year, the Lyonnaise had fallen to 79th in the world before Roland-Garros. And suddenly, the click! Victorious in double Porte d’Auteuil with Kristina Mladenovic, Garcia found her tennis, well helped by her coach Bertrand Perret, who made her intractable in the service. On her way, she won the grass tournament in Bad Homburg. In the heart of the summer, she added a new tournament to her list by winning in Warsaw. It then looked like a great season of renewal for the Lyonnaise. But we hadn’t seen anything yet! During the Cincinnati tournament, Garcia, from the qualifications because she was only 35th in the world, eliminated Sakkari, Pegula and Sabalenka, before offering Kvitova in the final. Logically outsider of the US Open, she held her rank until the semi-finals, where Jabeur left her only four games. Back in the Top 10, Garcia signed a dull autumn, before winning his ticket for the Masters. A Masters where she certainly lost against Swiatek in the group stage, but then beat Sakkari in the semis, before dominating Sabalenka in the final and winning the biggest title of her career. At 29, here is Caroline Garcia world number 4 again, and we hope that she will confirm in 2023, not like in 2018.

On Valentine’s Day, they made all sports lovers dream, especially sports on ice. This February 14, Gabriella Papadakis and Guillaume Cizeron won the only title missing from their fabulous list. Five-time European champions and four-time world champions, the two Frenchmen had never managed to win Olympic gold. In Beijing, they finally added this line of stature to their roster by becoming Olympic champions in ice dancing, then offering that day the 11th medal to the tricolor delegation, the 3rd golden. Their “tango between life and death”, as they had called it, the two skaters displayed it magnificently during the free program, all in grace and technicality in the Chinese camera. Already rewarded with the best mark two days earlier on the rhythmic dance, Papadakis and Cizeron exploded the world record, their world record, by winning the best mark in the free programs (136.15, overall score of 226.98 pts). Four years after the particularly frustrating silver charm in Pyeongchang, the 26-year-old could fall into the arms of her 27-year-old senior. A little over a month later, the couple confirmed their excellent form by becoming world champion for the 5th time, on French soil, in front of the public this time, in Montpellier. With the bonus, a new world record (137.09 pts on the free, 229.82 pts in total score). “A magical moment,” said Cizeron.

One of our other tricolor heroes over this rich year is called Léon Marchand. The young swimmer is all the more so as he was quite unexpected. The Toulousain revealed himself at the age of 20 during the World Swimming Championships disputed in June in Budapest. Marchand simply turned the sports world upside down in France by winning 3 medals, including 2 titles. Exiled for a little over a year in the United States, the prodigy has reaped the fruits of the work undertaken in Arizona under the eye of Bob Bowman, the man who built Michael Phelps, legend with 23 Olympic titles. Ranked 6th in his first Olympic final in Tokyo in 2021 in the 400m medley, Léon Marchand struck a huge blow in Hungary where he won the bet in the 200m medley and 400m medley. On this last distance, the Frenchman comes very close to Master Phelps’ world record (4’4″28 against 4’3″84). Alongside his two coronations, he also won silver in the 200m butterfly. Wow! The Toulousain, who remains calm in all circumstances despite his young age, is prodigious and extremely talented, not so surprising when you have a dad, a mom and an uncle who have all taken part in the Olympic Games. Merchant is hungry, very hungry. For the next Olympic Games, those of Paris at home in 2024, the phenomenon would like to chain 200 and 400m in medley, the 200m butterfly, the 200m breaststroke, the 200m freestyle plus a few relays. Extensive menu. But he has such an appetite…