Biathlon: Finally a podium in Grand-Bornand! 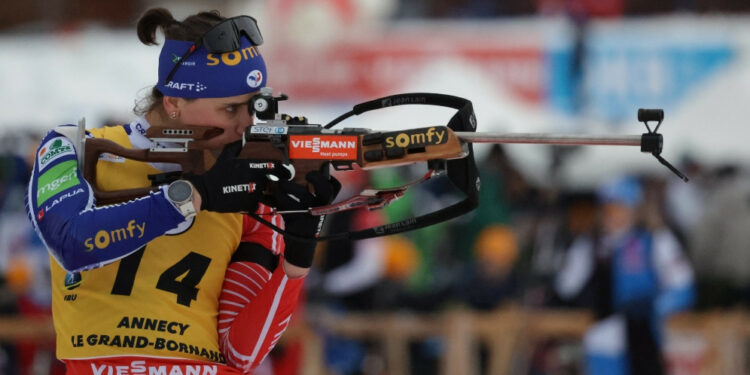 Julia Simon gave France their first podium of the week at Le Grand-Bornand in the pursuit, which saw Elvira Oeberg win with her first career 20 out of 20 in shooting, ahead of Lisa Vittozzi.

Friday, she had “experienced an ordeal” in the sprint, with a fifteenth place and two shooting faults. On Saturday, Julia Simon brought the French delegation their first podium during this 2022 stage at Le Grand-Bornand! The World Cup leader finished third in the pursuit and therefore consolidates her yellow jersey a little more, now 39 points ahead of Lisa Vittozzi. This pursuit promised to be tight, with twenty biathletes classified in the same minute at the end of the sprint, and it was Elvira Oeberg, eighth on Friday, who proved the strongest, signing the first 20 out of 20 of her World Cup career, aged 23. She beat Lisa Vittozzi by 20 seconds and Julia Simon by 47 seconds.

Salomon skis in the spotlight

After the first shot, a group of six biathletes stood in less than nine seconds, including the two Frenchwomen Julia Simon and Sophie Chauveau. After the second, it was reduced to five girls (including still the two tricolors), and it was finally the third shot that made the difference. Oeberg was the only one clear as Simon, Tandrevold, Vittozzi and Chauveau went to the penalty ring. On the last shot, the Swede confirmed her superiority, ahead of Vittozzi and Simon. Three girls with Salomon skis. Linn Persson finished sixth and first biathlete equipped with Fischer skis, this brand which caused great difficulties for Quentin Fillon and Johannes Boe in the men’s race. Two other French women finish in the Top 10: Sophie Chauveau, who confirmed her emotional fourth place on Friday by finishing eighth, and Anaïs Chevalier-Bouchet ninth. The objective of Les Bleues will be to get on a new podium on Sunday during the first mass-start of the season.