Swimming: Two new medals and a world record for France! 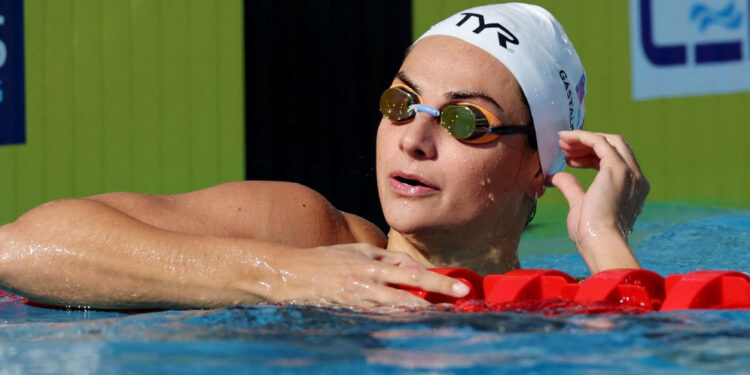 The French swimming team won its first gold medal at the short course world championships in Melbourne, thanks to the mixed 4x50m freestyle relay, which even broke the world record. Beryl Gastaldello won silver in the 100m medley.

First Marseillaise in Melbourne! After winning two silver medals thanks to Damien Joly and Maxime Grousset, the French delegation won its first title at the short course world championships, thanks to the mixed 4x50m freestyle relay. Maxime Grousset, Florent Manaudou, Beryl Gastaldello and Mélanie Henique gave everything to win ahead of the Australians and the Dutch, in a stunning time of 1’27″33, a new world record! It is the first time that France is crowned in this discipline which entered the program of the Worlds in short course in 2014, and the Blues erased from the shelves the Americans, who had managed 1’27 “89 there is four years.

#InDirect #Melbourne2022
The 4x50m mixed freestyle relay composed of GROUSSET, MANAUDOU, GASTALDELLO and HENIQUE is world champion in 1:27.33, NEW WORLD RECORD ?
Congratulations to all, without forgetting MOLUH who qualified the relay in the final during this morning’s series ???? pic.twitter.com/viUi7wM5tt

The only French medalist last year at the World Championships in Abu Dhabi, Béryl Gastaldello confirmed this year, once again winning the silver medal in the 100m medley. The Marseillaise finished second in 57″63, behind the Dutch Marrit Steenbergen (57″53) and therefore offers a fourth medal to the French delegation! In the 200m breaststroke final, Antoine Viquerat could not do better than sixth, but he still improved by six tenths the French record he had beaten in the playoffs, by signing a nice 2’03″33. The record had been held since 2009 by Hugues Duboscq, in 2’04″50. It was the Japanese Daiya Seto who was crowned over this distance, with the Asian record at stake (2’00’35). A few tens of minutes after her gold medal and her world record in the relay, Mélanie Henique dived again for the semi-finals of the 50m freestyle, and she qualified for the final with the seventh time (24″00) . Ditto for Florent Manaudou and Maxime Grousset, who qualified for the final of the 50m freestyle with respectively the seventh (20″95) and the eighth time (20″97). The last Frenchwoman in the running this Friday, the young Alexa Reyna (17), born in the United States, took eleventh place in the 1500m in 16’23″32

World record for MacNeil and the American relay

Also note this Friday the victory of the American Kate Douglass in the final of the 200m breaststroke in 2’15″77 (championship record). A final for which Charlotte Bonnet (converted to a brewer this season) had failed to qualify, since she had only signed the fifteenth time in the series. Canadian Margaret MacNeil was crowned in the 50m backstroke by beating the world record (25″25). Italian Thomas Ceccon won the 100m medley final (50″97), while American Ryan Murphy won the 50m backstroke (22″64) and the United States beat the world record in the 4x200m freestyle by winning in 6’44″12.

Thunderbolt for the Spanish team!

Thunderbolt for the Spanish team!