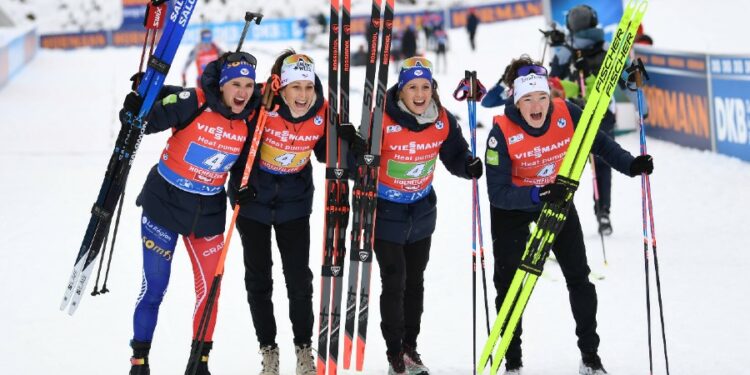 This Sunday, near Hochfilzen in Austria, the French women’s biathlon team won the relay, ahead of Sweden and Italy.

The French women’s biathlon team is in good shape. This Sunday, the Blues won the relay from Hochfilzen in Austria, as part of the World Cup for the specialty, ahead of Sweden. As for the podium of the day, it is completed by Italy. On the side of the Tricolores, it was Lou Jeanmonnot who then launched the debates. In contact with the best from the start of this event, the Habs had to draw only once during their first visit to the launch pad. Which had then made him stand out in fourteenth position. This did not however prevent her from gradually grabbing places. To address the second shot in fifth place. A perfect shot and Jeanmonnot then passed the baton to Anaïs Chevalier-Bouchet. France was then third. Anaïs Chevalier-Bouchet, after a perfect first shot, even allowed the Blues to take the lead.

And after two pickaxes on his second and last shot, the Habs were still second, behind Italy. A position retained by the Habs, at the time of the third and penultimate stint. Chloé Chevalier then took off. His first perfect shot then allowed him to return to the lead. And to stay second, despite a pickaxe during his last passage on the launch pad. Finally, it is Julia Simon, the current leader of the general classification of the world championship of the specialty, who left. And the Habs have confirmed that they are currently in very good shape. No pickaxe for her and France therefore flew to victory. Simon obviously consolidates, at the same time, his yellow jersey of leader, with this second victory. His third podium since the start of this new exercise.

Roglic knows when he will retire

A sizeable package in sight with the Blues!

A sizeable package in sight with the Blues!