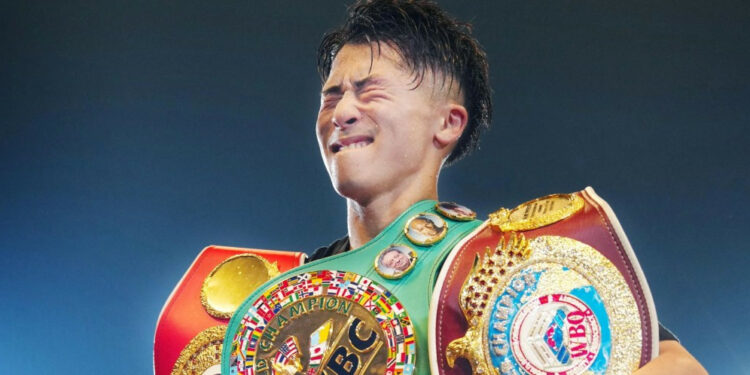 Already holder of the WBA, WBC and IBF world bantamweight champion belts, Naoya Inoue dominated Paul Butler by referee stoppage to add the WBO title in the category to his collection.

They are now four. Like “Canelo” Alvarez in super middleweight, Jermell Charlo in super-welterweight and Devin Haney in lightweight, Naoya Inoue now holds four world bantamweight championship belts. Indeed, while he successively won the WBA, IBF then WBC titles in the weight category of less than 53.525kg, the “Monster” once again struck this Tuesday in front of his audience at the Ariake Arena in Tokyo, room which notably saw the French men’s volleyball team be crowned Olympic champions in the summer of 2021. Undefeated in 23 fights, including 20 won before the limit, Naoya Inoue faced Paul Butler in a unification fight of the four world belts, the Englishman holding since April 22 that of the WBO. If the latter tried to resist the blows of the Japanese, he ended up gradually giving ground and had to resolve to defend more than attack.

Inoue will move up in category

Raining blows, the “Monster” ended up making his opponent give in. In the eleventh of twelve rounds, Paul Butler was knocked out by Naoya Inoue, who thus adds a 24th victory to his record and remains undefeated in his career. In a category that he concedes is “not easy”, the Japanese admitted after the fight that he achieved his goal. “It took a long time for the past four years before I finally became the undisputed champion of the roosters on December 13,” he said before making an announcement for the rest of his career. ” I’m honored to become unified world bantamweight champion, but that was my last fight at that weightsaid Naoya Inoue. I’m excited to see what awaits me in super roosters. “A category in which the native of Zama will aim to dislodge the Uzbek Murodjon Akhmadaliev and the American Stephen Fulton, who share the four world champion belts.