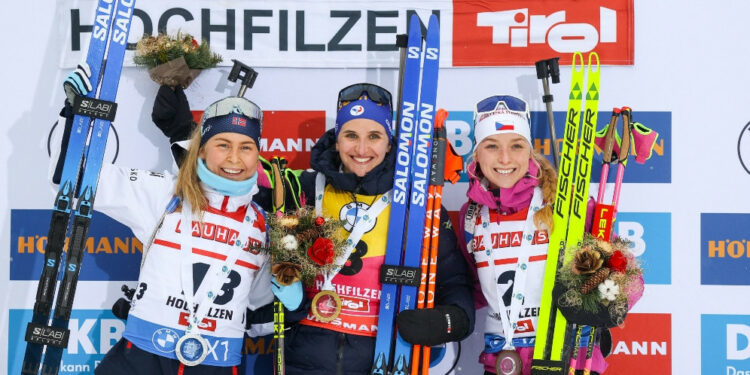 Already the leader of the World Cup, Julia Simon won the pursuit of Hochfilzen this Saturday with nearly twenty seconds ahead of her runner-up, Ingrid Tandrevold. The Frenchwoman is in the form of her life!

It is with the yellow Biathlon World Cup leader’s bib that Julia Simon will head to Annecy-Le Grand Bornand next week for the third stage of the season! Already the leader after her third place in the sprint on Thursday, the 26-year-old Frenchwoman consolidated her rank by winning the pursuit on Saturday, the second of the season after that of Kontiolahti. Starting 20 seconds behind Denise Herrmann-Vick and two behind Marketa Davidova on this 10 kilometer pursuit (fifth in the sprint, the Slovenian Lampic withdrew), Simon found herself in a group with the Czech and the Swedish Elvira Oeberg, behind the German, after the first shot where none of the leaders failed. But the second shot turned the standings upside down: Simon and Davidova went clear and took the lead (a fault for Herrmann-Vick and Oeberg).

On the third, Davidova made two errors, against only one for Simon, who then took control of the race, three seconds ahead of the Swede Linn Persson, who had still not made a mistake at this time. -the. Julia Simon was under pressure for her last shot, but she did it magnificently, and came out of the shooting range 26 seconds ahead of Davidova and 28 over Ingrid Tandrevold (two faults for Persson, who had come back on the French ). The yellow jersey did not shake in the last kilometers of the race to get her sixth victory in the World Cup in an individual event, ahead of the Norwegian and the Czech. The four other French women, awkward behind the rifle, finished between 12th and 22nd place. On Sunday, a relay will be on the program, before the big meeting at Grand-Bornand, where the public will only have eyes for the new star of French biathlon!

Ronaldo remains on the bench!

Ronaldo remains on the bench!