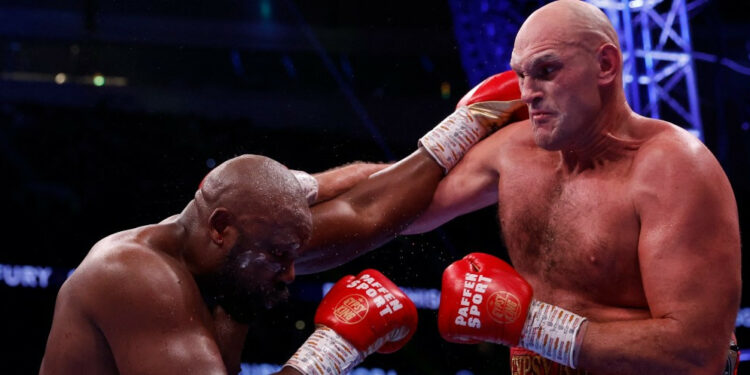 Tyson Fury had promised “carnage”, he kept his word! A little over seven months after his victory over Dillian Whyte at Wembley and his multiple announcements regarding a potential retirement, The “Gypsy King” rocked the Tottenham Hotspur Stadium in an all-British duel against Derek Chisora with the WBC world heavyweight champion belt at stake. A fight that “Del Boy” was able to start with a bang, trying to outrun Tyson Fury and send him into the ropes. However, the latter very quickly calmed down the native of Harare thanks to two perfectly placed sequences. Very quickly, the balance of power turned in favor of the belt holder who, despite his opponent’s provocations, did not get out of the fight. Mastering the rhythm of the fight, the “Gypsy King” did his best to let his opponent squander his strength and reach his limits on the fourth round.

Fury too strong for Chisora

Managing to place his shots, Tyson Fury always put Derek Chisora ​​in more difficulty, transforming this fight into a cakewalk whose outcome seemed already written. Despite regaining form in the seventh round, “Del Boy” came close to knocking out in the eighth and then the ninth round. It was finally in the tenth that the referee of the meeting Victor Loughlin decided to end the massacre against a Derek Chisora ​​who staggered dangerously. For the 33rd time in 34 fights and the 24th before the limit, Tyson Fury wins and retains his WBC world heavyweight champion belt. “I felt good this (Saturday) evening, I did my job well, I sent some good shots, confided the Briton from the ring a few moments after the conclusion of the fight. I thank Derek Chisora, he is a warrior, a British hero. He’s the only one who’s always stood up to me. »

For his part, his opponent wanted to thank the “Gypsy King” for this had the chance to challenge him in the ring. “When you’re a fighter you don’t want to quit, you want to die sword in hand,” he said. I thank Tyson Fury for giving me this opportunity. It pays homage to our nation. A boxing evening that could not end without a small provocation from Tyson Fury towards Oleksandr Usyk, present at ringside this Saturday. “You beat a bodybuilder, but I’m not. You were good but it’s gone little one… you can laugh now but I’ll have the last word, he launched to the Ukrainian, holder of the WBA, IBF and WBO belts in the category. Little sausage, you won’t be able to do anything! While a title unification fight is on the horizon, this verbal contest sets the tone and promises a lot of spectacle between these two characters in world boxing.