Real come back from afar 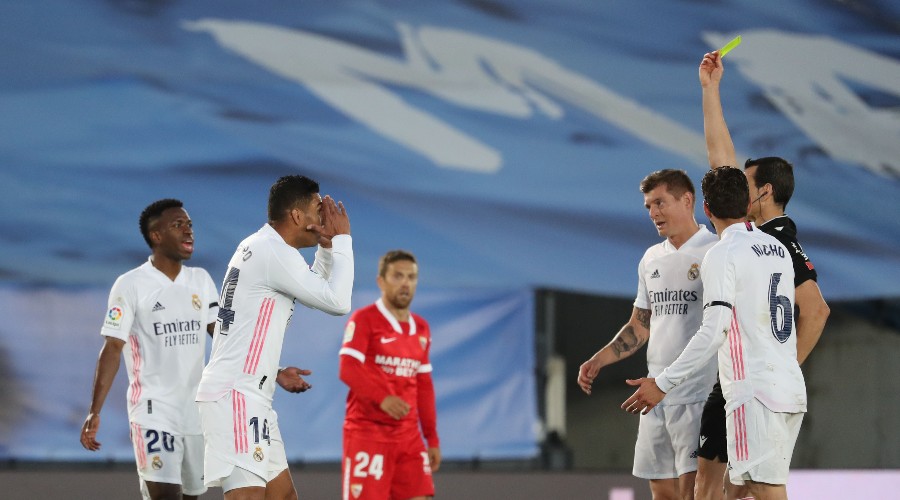 Thanks to a happy goal from Hazard in added time, Real Madrid hung Sunday in a draw against Sevilla FC (2-2). The title race keeps all its suspense.

Three leading teams who stand in two points three days from the end, this is the exciting program of the Spanish Championship version 2020-2021. An intense suspense preserved Sunday evening by the mind of Real Madrid. Despite not very favorable circumstances, such as a decimated team at the start (absences of Ramos, Varane, Mendy, Carvajal and Vazquez), a goal of Benzema canceled for a limit offside (12th) or this post found by Vinicius (65e), Zidane’s men did not give up.

They provoked the success in added time of the second half with this strike from Kroos accidentally diverted by Hazard’s heel for a perfect opposite foot synonymous with a draw (2-2, 90e + 5). Enough to erase the penalty converted by Rakitic (1-2, 78e), the consequence of a hand from Militao, when Benzema thought he had obtained the same sentence during the action that followed.

The referee was able to remain lucid in this somewhat confused scene of the VAR (two actions to be judged) but no difficulty, on the other hand, to grant the opener for Sevilla FC signed Fernando. The Brazilian was admired in passing his technical ease by martyring his compatriot Casemiro (0-1, 22e). Asensio, him, exploited with his left foot a beautiful collective movement to put the White House up to par (1-1, 67e).

Casemiro was even a few centimeters away from performing a mini hold-up after additional time, on a flat right foot (90e+6). The essential was still preserved for the Madrilenians, second in the standings, avoiding defeat. They remain in the race for the title with Atlético, leader, and FC Barcelona, ​​third.