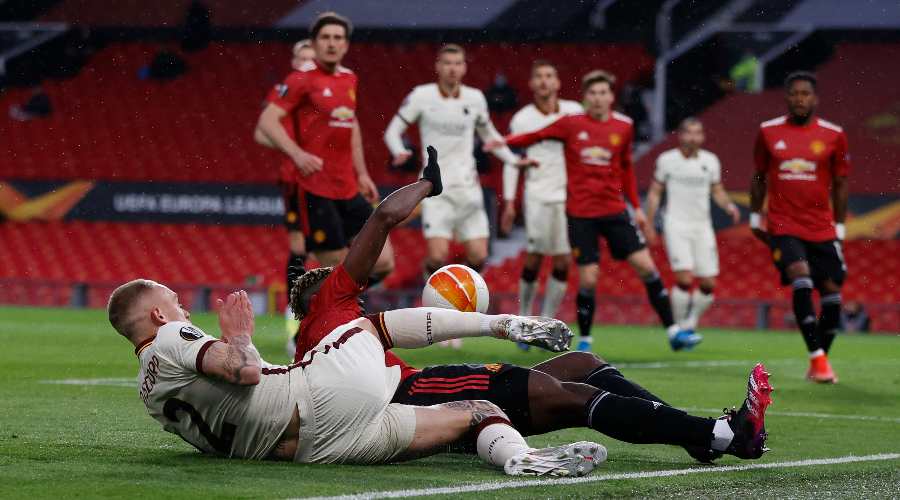 Guilty with one hand by tackling in the box, Paul Pogba caused a penalty against AS Roma on Thursday in the semi-final first leg of the Europa League.

Manchester United hit hard in front of theAS Rome, Thursday. Surprised from the outset, the Red Devils ended the meeting with their feet to the ground to finally win 6-2 at Old Trafford and take an almost final option on qualifying for the Europa League final. A victory that owes a lot to the stars of Mancun.

Bruno Fernandes as well as’Edinson Cavani have each gone with a double and Paul pogba was not to be outdone with the fifth goal scored with a nice header and constant activity in the midfield. The meeting had started off on the wrong foot for the tricolor world champion. Or rather a bad hand. The one he left trailing in the area after a tackle on a Roman player.

The former Turinese nevertheless preferred to joke at the end of the meeting. “I don’t know how to tackle, why do I have to tackle,” he said at BT Sport’s microphone. It’s my problem, I try to tackle, to be like an Englishman! I still need to train. ” But the essential was elsewhere for the native of Lagny-sur-Marne whose rise in power is confirmed match after match. “I’ve been feeling a lot better for some time. I have the confidence of the players, the staff, he assured. I’m starting to get used to this 8 off-center position. I get along well with Luke Shaw and Fred behind. We must continue like this. ”

Unheard of for France for 51 years …